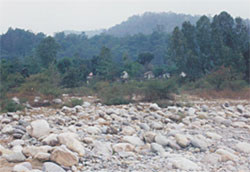 Prior to the years 1815-20 of the British Rule, the forests of the Jim Corbett National Park were the private property of the local rulers. Though the ownership had passed into the British hands, the government paid little or no attention to the upkeep of the park. The sole aim was to exploit the natural resources and extract as much profit as possible from the jungle.

It was only in the year 1858 that
Major Ramsay drew up the first comprehensive conservation plan to protect the forest. He ensured that his orders are followed strictly and, by 1896 the condition of the forest began to improve. Ramsays plan reflected the deep thought he had given to the science of forestry. In 1861-62 farming was banned in the lower Patlidun valley. Cattle sheds were pulled down, domestic animals were driven from the forest and a regular cadre of workers was created to fight forest fire and secure the forest from illegal felling of trees. Licenses were issued for timber and count of trees was undertaken. In 1868, the Forest department assumed responsibility for the forests and in 1879 they were declared reserved forest under the forest Act.

In a letter dated January 3,1907, Sir, Michael Keen for the first time referred to the possibility of turning these forests into a game sanctuary however the proposal was turned down. It was years later in 1934 the governor, Sir Malcolm Hailey, supported the proposal for the sanctuary and wanted the enactment of a law to give it protection. To overcome the delays that legislation would entail the area was made into a reserve forest by the Chief Conservator of forest. Later in consultation with Major Jim Corbett, the boundaries of the park were demarcated and in 1936 The United Province national Park Act was enforced and this reserved forest became the first national Park of India. And it was aptly named Hailey National Park after its founder Sir, Malcolm Hailey

Initially the park measured merely 323.75 square kilometers, but to accommodate wild animals like Tigers and Elephants, it was expanded to its present area of 520 square kilometers (core area) in 1966. The year 1973 was a landmark in the field of wildlife preservation. It was in this year that wildlife preservationist and naturalists from around the world launched PROJECT TIGER the most prestigious and biggest total environmental conservation project ever undertaken. The Jim Corbett National Park has the distinction of having been chosen the venue for the inauguration of this project.


Jim Corbett National Parkâ€”named after the hunter and naturalist Jim Corbett who played a key role in its establishmentâ€”is the oldest national park in India. The park was established in 1936 as Hailey National Park. Situated in Nainital district of Uttarakhand, the park acts as a protected area for the critically endangered Bengal tiger of India, the secure survival of which is the main objective of Project Tiger, an Indian wildlife protection initiative.

There is a lot for the bird watching opportunities in this park as it has over 580 species of birds. Most of the water birds are the migrant variety, and arrive in winters. Some of these are the graylag, bareheaded goose, duck, grepe, snipe, sandpiper, gull and wagtail. The residents include darters, cormorants, egrets, herons, the black-necked stork and the spur winged lapwings.


Jim Corbett National Park India is a haven for Tigers as well as its prey, which include four kinds of Deer, Wild Boar and some lesser-known animals. Leopards are mostly found in the hilly areas of the Corbett park. Some nocturnal cats found here are the Leopard Cat, Jungle Cat and Fishing Cat. Sloth Bear is found in the lower regions of the park while the Himalayan Black Bear is seen in the higher hills only. The Dole or Wild Dog, though they can be seen in the southern areas of the park along with the Jackal. Some of the smaller residents of the park are Himalayan Palm Civet, Indian Gray Mongoose, Common Otter, Blacknaped Hare and Porcupine. Elephants are among one of the main attractions of Jim Corbett Park. Along the Ramganga River shores, one can spot the long-snouted, fish-eating Gharial Crocodile and the 'Mugger' Crocodile. Also seen on the rocky hillsides is the Ghoral or Goat Antelopes. The Langur and Rhesus Monkeys are well distributed through out the jim corbett national park and warning the whole Jungle with alarm calls when they see either a Tiger or Leopard from tree-top perches.