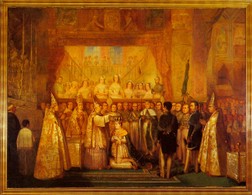 The reign of Pedro II, lasting practically a half century, constitutes perhaps the most interesting and fruitful epoch in Brazilian history. The prestige and progress of the nation were due largely to the enlightened statesmanship of its ruler. Though not without personal distinction he was always simple, modest, and democratic. He possessed an insatiable intellectual curiosity and was never happier than when conversing with scholars. He was generous and magnanimous to a fault. One of his favourite occupations was inspecting schools. He was wont to declare, "If I were not emperor I should like to be a schoolteacher." Yet this kindly, genial, and scholarly ruler took his prerogatives and duties as sovereign with great seriousness, and in all matters of first importance he was the final arbiter. According to the moderative power granted to the executive under the constitution of 1824, the emperor had the right to dissolve the Chamber of Deputies, to select the members of the life senate from triple lists submitted by the province, and to appoint and dismiss ministers of state. A kind of parliamentary government functioned under the watchful eye of the Emperor.

Pedro's government took a keen interest in the affairs of the Plata republics, especially of Uruguay, which it sought to control through indirect measures. Brazil aided in the overthrow of the Argentine dictator Juan Manuel de Rosas in 1852. In 1864 Brazil intervened in Uruguayan internal affairs, precipitating war with Paraguay. In alliance with Argentina and Uruguay, Brazil successfully waged the costly and bloody Paraguayan War of 1864-70, eventually overthrowing the Paraguayan dictator Francisco Solano López. This war of the Triple Alliance was the longest and bloodiest war in South American history, and its consequences in Brazil were profound. The empire's relations with the United States and with Europe were generally cordial, Pedro personally visiting Europe in 1871, 1876, and 1888 and the United States in 1876.

The empire's major social and economic problems were related to slave-based plantation agriculture. Real political power remained with large rural landholders, who formed the core of the social and economic elite of Brazil. Industrialization was still economically insignificant, and, with the decline of gold mining, agriculture was unrivaled as the source of Brazil's wealth. Cotton, and increasingly after 1840, coffee, competed with sugar as the leading export crop. The rural landholders were largely insulated from the antislavery current of the times. Although manumission was common, and the number of freedmen and their descendants far surpassed the number of slaves in Brazil, the slave owners as a group resisted pressures for the complete abolition of slavery. Partly as a result of pressure from Great Britain, Brazil had agreed to abolish the slave trade in 1831, but it was not until 1851 that slave traffic completely ceased. Agitation to abolish slavery as such began in the 1860s. Pedro was opposed to slavery, but he had to reckon with the slave owners. Yet the ending of slavery internally seemed the next logical step after stemming the importation of slaves. Accordingly, in 1871, the Law of the Free Womb was enacted, declaring free all children born to slaves. The legislation condemned slavery to eventual extinction. But, although agitation subsided briefly, this concession did not satisfy many of the abolitionists. Led by a young lawyer and writer, Joaquim Nabuco de Araújo, they demanded immediate and complete abolition. Nabuco's book O Abolicionismo (1883; Abolitionism) endeavoured to prove that slavery was poisoning the very life of the nation. In 1884 Ceará and Amazonas freed their slaves; in 1885 all slaves over 60 years of age were liberated. Finally, complete emancipation without compensation to the owners was decreed by the Princess Regent in the absence of the Emperor on May 13, 1888. About 700,000 slaves were freed.
The history of the Empire of Brazil began in 1822, with the proclamation of independence, and lasted until 1889, when the Republic was established. At first, the European countries did not recognize the government of D. Pedro I. The United States through the Monroe Doctrine sided by the autonomy of the American continent, were the first to recognize the political emancipation of Brazil. The Portuguese crown only recognized the independence of Brazil in August 1825, after the intervention of England, which had so many commercial advantages with Brazil. Portugal also received 2 million pounds as compensation.
Acervo Museu Imperial Work of 1824 shows the enthroning of D. Pedro II. Oil on canvas, 2.38 x 3.10 m, François-René Moreaux (1807-1860) Enlarge