The history of India is one of the grand epics of world history and can be best described in the words of India's first Prime Minister Jawaharlal Nehru as "a bundle of contradictions held together by strong but invisible threads". Indian history can be characterized as a work in progress, a continuous process of reinvention that can eventually prove elusive for those seeking to grasp its essential character.

The history of this astonishing sub continent dates back to almost 75000 years ago when the evidence of human activity of Homo sapiens. The Indus Valley Civilization which thrived in the northwestern part of the Indian subcontinent from 3300- 1300 BCE was the first major civilization in India.

Following is the history of India through the Ages:


1. The Stone Age:
The Stone Age began 500,000 to 200,000 years ago and recent finds in Tamil Nadu (at C. 75000 years ago, before and after the explosion of the Toba Volcano) indicate the presence of the first anatomically humans in the area. Tools crafted by proto-humans that have been dated back to two million years have been discovered in the Northwestern part of the country. 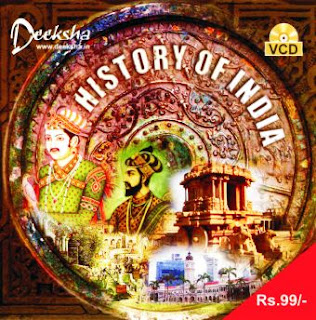 2. The Bronze Age:
The Bronze Age in the Indian subcontinent dates back to around 3300 BCE with the early Indus Valley Civilization. Historically part of ancient India, it is one of the world's earliest, urban civilizations, along with Mesopotamia and Ancient Egypt. Inhabitants of this era developed new techniques in metallurgy and handicraft and produced copper, bronze, lead and tin.


1. Vedic Period:
The Vedic Period is distinguished by the Indo-Aryan culture which was associated with the texts of Vedas, sacred to Hindus, and that were orally composed in Vedic Sanskrit. The Vedas are some of the oldest extant texts, next to those in Egypt and Mesopotamia. The Vedic era in the subcontinent lasted from about 1500-500 BCE, laying down the foundation of Hinduism and other cultural dimensions of early Indian society. The Aryans laid down Vedic civilization all over North India, particularly in the Gangetic Plain.