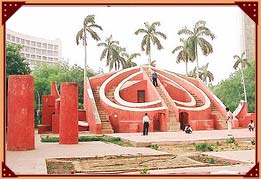 Jantar Mantar is an important landmark of Delhi and a unique edifice. It is an observatory built by Sawai Jai Singh II, the erstwhile ruler of the princely state of Amber and a contemporary of the Mughal emperor Aurangzeb. The various abstract structures within the Jantar Mantar are, in fact, instruments that were used for keeping track of celestial bodies. Nevertheless, the Jantar Mantar is not only a timekeeper of celestial bodies: it also tells a lot about the technological achievements under the Rajput kings and their endeavor to unravel the mysteries pertaining to astronomy.....

The Jantar Mantar of Delhi is only one of the five observatories built by Sawai Jai Singh II, the other four being located at Jaipur, Varanasi, Ujjain and Mathura. All of these were built as far back as AD 1724-1730 during the period generally known as the dark age of Indian history, when the last great Mughal emperor Aurangzeb had died and the Mughal Empire was declining rapidly. 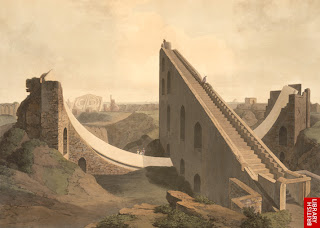 During this period of chaos, Muhammad Shah ascended the throne of the Mughal Empire. As many enemies surrounded him, he sought the alliance of the Hindu rulers. Of these, the most notable was Sawai Jai Singh II of Amber, who came into limelight since the days of Aurangzeb. When Jai Singh ascended the throne of Amber in 1699, he was barely eleven, but sharp and shrewd far beyond his years. The then Mughal emperor Aurangzeb was so impressed with the young ruler that he gave Jai Singh II the title of Sawai, meaning one and a quarter of an average man in worth. As Jai Singh repeatedly proved himself as a worthy ally of the Mughals, Muhammad Shah, who was seeking a dependable ally, zeroed in on Jai Singh and duly raised him to the rank of governor of Agra and later, of Malwa.
Jai Singh was passionate about two things-the arts and the sciences, chiefly astronomy. Once, at the court of Muhammad Shah, he found the Hindu and Muslim astrologers embroiled in a heated argument over certain planetary positions. It was imperative that the positions be known accurately to determine an auspicious hour for the emperor to set out on an expedition. Jai Singh offered to rectify the then available astronomical tables, an offer that was readily accepted by the Mughal emperor. The result: an onsite Jantar Mantar in Delhi, an astronomical observatory where the movements of sun, moon and planets could be observed. Jai Singh's idea was to create a renaissance in practical astronomy among the Indian masses and practicing astronomers. However, the lofty ideals of the Jantar Mantar remained unfulfilled as the country at that time was in turmoil and the full potential of this observatory was never realized.

To start with, Jai Singh tried to use brass instruments in this observatory, but soon gave them up because of several inherent flaws. They were too small, for one thing, their axes were unstable so the center often got displaced. He next decided to follow the style adopted by the renowned Arab astronomer, Prince Ulugh Beg, builder of the famous 15th-century observatory at Samarkand, Uzbekistan. The massive masonry instruments at Samarkand suited Jai Singh's architectural tastes and promised to be more accurate because of sheer size. In 1730, Jai Singh sent a mission to the king of Lisbon. On its return to Jaipur, the mission brought back a telescope and no less a person than the court astronomer himself, by the name of Xavier de Silva.

This unique observatory was completed in 1724 and remained operational only for seven years. Astronomical observations were regularly made here and these observations were used for drawing up a new set of tables, later compiled as Zij Muhammad Shahi dedicated to the reigning monarch. Jai Singh named his observatory Jantar Mantar (actually Yantra Mantra, yantra for instrument and mantra for formula). It is dominated by a huge sundial known as Samrat Yantra, meant to measure the time of the day accurate to within half a second and the declination of the sun and other heavenly bodies. Jai Singh himself designed this yantra. Other yantras were also meant for the study of heavenly bodies, plotting their course and predicting eclipses. The two pillars on the southwest of Mishra Yantra are meant to determine the shortest and longest days of the year. Interestingly, in December one pillar completely covers the other with its shadow while in June it does not cast any such shadow at all.

Spurred on by the completion of the first Jantar Mantar and with a view to verifying astronomical observations made at Delhi, Jai Singh built similar, if smaller observatories, at other important Indian cities-Jaipur, Varanasi, Ujjain, and Mathura. The state of these observatories is bad; the one in Mathura was demolished, while those in Ujjain and Varanasi are in state of decay. But the observatory at Jaipur is the best preserved of all because in 1901 Raja Ram Singh, the then ruler of Jaipur, refurbished it with the help of a British engineer. All the masonry instruments were lined with marble so that the graduations on them are not worn out.

The Jantar Mantars may have fallen into disuse but they remain an integral part of India's scientific heritage. The Jantar Mantar in Delhi is often projected in travel books, brochures, on postage stamps and was the logo of the 1982 Asian Games. The Jantar Mantar shows that the spirit of scientific enquiry was not dead in India and would have yielded rich results if only an opportunity had been given to it to fructify. The Jantar Mantar on the Parliament Street remains one of the most intriguing structures of the capital, one that explodes in a burst of questions in the mind of the inquisitive tourist.

HOW TO REACH JANTAR MANTAR

Tourists can reach the Jantar Mantar in many ways. They can either take local buses from various points within the city to reach this monument, which is located in Connaught Place, the heart of the city, or they can hire auto-rickshaws and taxis for the purpose. One can take buses from the bus termini located at Kashmere Gate and Sarai Kale Khan to reach this monument. Local guided tours conducted by Delhi Tourism and private operators covers this important monument.

Some of the major instruments at Jantar Mantar are:

The Samrat Yantra 'Prince of Dials' (the largest device)
The Ram Yantra - two circular buildings
The Jai Prakash
The Misra Yantra (north-west to the Samrat Yantra)
Pillars on the southwest of Mishra Yantra used to measure the shortest and longest days of the year.
The Samrat Yantra measured the accurate time of the day. It also measured the declination of the sun which can be seen by the shadow moving around the structure.


The Jai Prakash shows the sun's position at the time of equinox. There is a hole near the bottom of the structure which witnesses sunshine only once in a year that is on 21 march, called vernal eqinox.


Another important structure called the Ram Yantra, consists of two large buildings with open top. Both these two buildings form a complete device. The device is used to measure the altitude of stars which is equivalent to the latitude and the longitude on the earth.


To the north-west of the Prakash Yantra, there is a structure or instrument called Mishra Yantra. It consists of five instruments. Pillars on the southwest of Mishra Yantra are used to measure the shortest day (21 December) and the longest day (21 June) of the year.


It is no denying the fact that the structure does represent the scientific heritage of India, though not being used in the modern scientific research. Having said that, we must give accreditation to the Jantar Mantar for its scientific acumen which could have reaped more fruits had there been appropriate motivation and resource given for research and development.

Location- The Jantar mantar, the observatory in Jaipur is located near the gate of the illustrious City Palace of Jaipur in Rajasthan.

History- The Jantar Mantar was built by Maharaja Sawai Jai Singh II, the founder of Jaipur and the Rajput ruler of Amber, between 1728 and 1734. For being a reputed astronomer, Jai Singh was commissioned by Emperor Muhammad Shah, to correct the astronomical tables and to confirm the data that was available on the planetary positions. He took nearly seven years to finish the Jantar Mantar. It was restored in 1901 and in 1948 the famous observatory was declared a national monument.

Description- The observatory consists of 13 different instruments of various geometrical forms for calculating the time of day, the heights of heavenly bodies, predicting eclipses and the situations of constellations. These instruments are of gigantic sizes so that accurate readings can be obtained. The instruments can make accurate measurements within one second. Jantar Mantar consists of the Jaiprakash Yantra, Samrat Yantra, Ram Yantra and the Composite instrument which contains a sundial and an enormous hemisphere on the northern wall.

The colossal Samrat Jantar is the sun dial that is 90 feet high and its shadow is carefully contrived to tell the time of a day. The small domed cupola (chhatri) at the top is used for predicting eclipses and the coming of monsoons.

Till dated , the instruments of Jantar Mantar are used for forecasting weather, the duration of seasons, the intensity of the monsoon, and the prospects of flood or famine. The Jantar Mantar stands as a testimony to the wisdom of the former epoch and awaits the visit of every tourist.