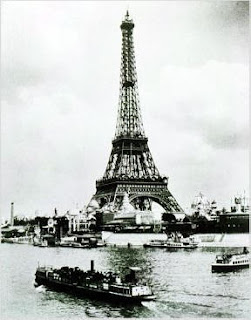 The Eiffel Tower was built for the International Exhibition of Paris of 1889 commemorating the centenary of the French Revolution. The Prince of Wales, later King Edward VII of England, opened the tower. Of the 700 proposals submitted in a design competition, Gustave Eiffel's was unanimously chosen. However it was not accepted by all at first, and a petition of 300 names - including those of Maupassant, Emile Zola, Charles Garnier (architect of the Opéra Garnier), and Dumas the Younger - protested its construction.
At 300 meters (320.75 m including antenna), and 7,000 tons, it was the world's tallest building until 1930. Other statistics include: 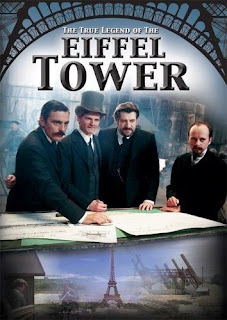 Sway of at most 12 cm in high winds.
Height varies up to 15 cm depending on temperature.
15,000 iron pieces (excluding rivets). 40 tons of paint. 1652 steps to the top.
In 1889, Gustave Eiffel began to fit the peak of the tower as an observation station to measure the speed of wind. He also encouraged several scientific experiments including Foucault's giant pendulum, a mercury barometer and the first experiment of radio transmission. In 1898, Eugene Ducretet at the Pantheon, received signals from the tower.
According to NASA climate scientist Jay Zwally, the 'Arctic is the canary in the coal mine.' What do you think would happen to the Eiffel Tower due to global warming? Please send your thoughts to our Webmaster! ... and do not be surprised if these are published on our Web site.

After Gustave Eiffel experiments in the field of meterology, he begun to look at the effects of wind and air resistance, the science that would later be termed aerodynamics, which has become a large part of both military and commercial aviation as well as rocket technology. Gustave Eiffel imagined an automatic device sliding along a cable that was stretched between the ground and the second floor of the Eiffel Tower. (reference
The tower was almost torn down in 1909, but was saved because of its antenna used both for military and other purposes, and the city let it stand after the permit expired. When the tower played an important role in capturing the infamous spy Mata Hari during World War I, it gained such importance to the French people that there was no more thought of demolishing it.- used for telegraphy at that time.

From 1910 and on the Eiffel Tower became part of the International Time Service. French radio (since 1918), and French television (since 1957) have also made use of its stature.

During its lifetime, the Eiffel Tower has also witnessed a few strange scenes, including being scaled by a mountaineer in 1954, and parachuted off of in 1984 by two Englishmen. In 1923 a journalist rode a bicycle down from the first level. Some accounts say he rode down the stairs, other accounts suggest the exterior of one of the tower's four legs which slope outward. (reference)