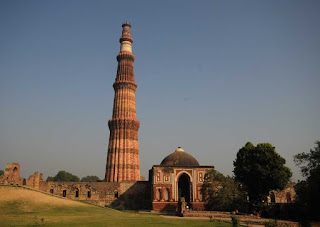 Qutub Minar: The Tallest Monument in India
The tall and ever attractive monument of Delhi which can be seen from most parts of the city is called the Qutab Minar. Every body has the same question when one sees the structure for the first time. The question that is often being put up is "Why the monument is that big?" or "Was there any specific reason to build such a tall building or it was just a wish of the person who built it?" Well, the exact reason is assumed to have something related to commemorating the victory. Mughals used to build victory towers to proclaim and celebrate victories. Some say the minaret was used to offer prayer but it is so tall that you can hear the person standing on the top. Also, the minaret is not joined on to Qutuddin's mosque and the Iltutmish's mosque.
Qutab Minar is among the tallest and famous towers in the world. The minaret is 234 feet high and the highest individual tower in the world. Other towers in the world are the Great Pagoda in Pekin, China and the Leaning Tower of Pisa in Italy but these towers are not as high as the Qutab Minar in Delhi....... 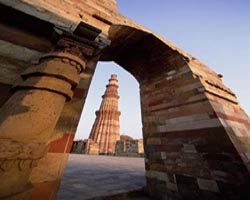 According to history books, the minar was started by Prithviraj or his uncle Vigraharaja who won Delhi from the Tomar Rajputs. However, it is assumed and historians believe that Qutubuddib and Iltutmish finished it though the minar may have been commenced by Prithviraj or Vigraharaja. The minar was completed in 1200 A.D and since then the tall structure has been there upright and ever beautiful keeping an eye to Delhi just like a sentry. When Alauddin returned from the wars in the Deccan, he had this thought in mind that he would build a victory tower somewhat similar to the Qutab Minar. The ruins of this very initiative can be seen adjacent to the Qutbuddin's mosque because Alauddin died at the very start of the construction work and no one carried on to finish the initiative taken by Alauddin.

Qutab Minar is another great masterpiece of Mughal architecture. It has a number of floors or storeys which has beautiful carvings like the one on the tomb of Iltutmish. There are inscriptions all round the tower and these inscriptions reveal that Iltutmish finised the tower. The structure of the wall is made as such that it widens from top to bottom, just to make the minar stronger. 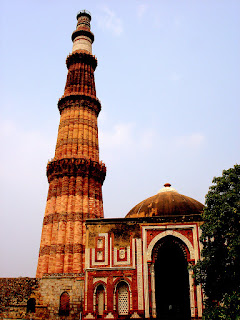 Moving upstairs inside the minar will give you a wonderful experience and counting the stairs is always a fun for visitors. It has 378 steps which takes good amount of energy to reach at the top. The top of the tower gives an insight to Delhi because you get to see the bird's eye view of the city. To point a few sight seeing from the top, you will find views of the Hauz Khaz on the left and the walls of the Jahanpanah and Siri on the right. It was this very top of Qutab Minar that was used by Khilji and Tughlaq kings to watch the wild Mongol hordes when they threatened Delhi. The top also served as the watch top for Tughlaq who watched Timur's army camp on the Wellingdon Airport. Other important monuments that is visible from the top are the walls of Tughlaqabad, Humayun's Tomb, Purana Qila, Firoz Shah Kotla and Jama Masjid.

The minar did receive some damage because of earthquakes on more than a couple of occasions but was reinstated and renovated by the respective rulers. During the rule of Firoz Shah, the minar's two top floors got damaged due to earthquake but were repaired by Firoz Shah. In the year 1505, earthquake again struck and it was repaired by Sikandar Lodi. Later on in the year 1794, the minar faced another earthquake and it was Major Smith, an engineer who repaired the affected parts of the minar. He replaced Firoz Shah's pavilion with his own pavilion at the top. The pavilion was removed in the year 1848 by Lord Hardinge and now it can be seen between the Dak Bungalow and the Minar in the garden. The floors built by Firaz Shah can be distinguished easily as the pavilions was built of white marbles and are quite smooth as compared to other ones.

The minar is not that erect as it used to be because of wears and tears over the past several years. Closely looking at the mina rives you an idea that it is somewhat tilled towards one side. The minar is very sincerely looked after by the authorities much like the same as other historic monuments in the country........
Posted by Saahil at 15:34