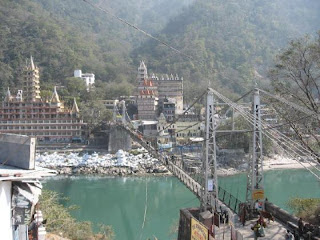 Rishikesh or Hrishikesh has got its name from the God Vishnu, who appeared as Lord Rishikesh to Rabhya rishi after his austerities. It is also believed that Lord Rama did penance here on the advice of Sage Vashishtha to kill the demon king Ravana. His younger brother Laxman or Lakshman crossed the Ganga river using a jute rope bridge, which later got the name Lakshmana or Laxman Jhula. There is a Laxman temple as well as Ram, Bharat & Shatrughna temples present in Rishikesh on the banks of Ganga near Lakshman Jhula. 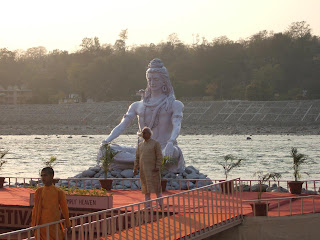 Rishikesh has been the centre of spiritual and religious activities since ancient times. This place situated on the right bank of the river Ganga is surrounded on all sides by beautiful hills.Rishikesh is the gateway for pilgrimage to Badrinath and Kedarnath.Rishikesh is also referred as the yoga capital of the world and it houses a number of ashrams offering yoga and meditation courses. This famous pilgrimage spot is also noted for its traditional and cultural performances, exotic cuisine and many other enriching unique factors which fascinates the tourists coming here giving them a wonderful experience. Its serene and holy atmosphere inspires the pilgrims with pious thoughts. It is around Rishikesh where sages, seers or the rishis and munis in ancient times practiced severe penance and meditation.Rishikesh is also an interesting places for those who adventure as passion for in recent times, it is developing as a place of adventure tourism like white water rafting. 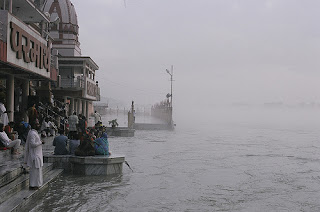 The history of Rishikesh states several mythical stories associated with this place. It was here in Rishikesh a famous saint named Raibhya Rishi performed penance on the banks of the river Ganga.As a reward for his strong penance God Vishnu appeared to him in the form of Hrishikesh and so the place was referred by the name Hrishikesh which later became famous by the name of Rishikesh.God Rama's younger brother Bharat himself has performed deep penance here; that is why even today there stands the Bharat temple after his name. However Rishikesh became a noted religious pilgrimage place only after the visit of Adi Shankaracharya in the 9th century AD who was one of the famous religious leaders of contemporary times. Yet there is another version of history which says that the name Rishikesh is derived from the word Hrishikesh, is another name of Lord Vishnu who killed the demon Madhu here. 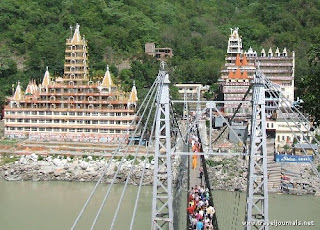 FAIRS & FESTIVALS
The Yoga festivals in Rishikesh are one of the most popular in the country of India. Lectures and yoga lessons are conducted by experts in this field during which yoga teachers from different parts of the country participate and many people come from different parts of the country to attend this. Attending satsangs and meditation sessions also form a major part of the yoga festival in the city of Rishikesh.Ganga Aarti is another religious ceremony celebrated during the yoga festival in Rishikesh.

TRIVENI GHAT
This is a well known bathing ghat on the bank of the Ganga in the city of Rishikesh.In the evening, devotees sing song in adoration to the Gnaga and float in the river with hands full of flowers with lighted eathern lamps. This presents a very enchanting scene of the tourists and devotees. According to the legend, in ancient times, this place was the confluence of three mountain streams and it came to be known as Triveni Ghat.
BHARAT TEMPLE
It is close to triveni ghat, a grand temple of Lord Vishnu. As it was the place of penance of God Ram's younger brother Bharat, it came to be known as Bharat temple. The presiding deity of this temple is Lored Narayana and inscriptions say that this temple was renovated by Shankaracharya, the great theologian of the 8th century.

LAKSHMAN JHULA
This Jhula is built over Ganga enroute from Rishikesh to Devprayag, at a distance of 4kms from Rishikesh.This bridge connects the borders of the areas of Tehri and Pauri.The legend is that Ram Chandraji's younger brother Lakshman performed penance here. After his name this hanging bridge came to be known as Lakshman Jhoola.A grand temple of Lakshman is situated in the vicinity of the bridge. There are many temples nearby which are worth seeing.
NEELKANTH MAHADEV
This place is 12kms away from Rishikesh on foot but by road it is at a distance of 38kms.The legend is that after taking poison found as a result of churning of the ocean, God Shankar's troat turned blue and that is why the God Neelkanth was installed here. The devotees visit this place throughout the year but during the whole month of Shravan the temple is thronged by tourist and devotees.

KUNJAPURI TEMPLE
This temple of Goddess Durga is situated on a hill at a distance of 25kms.On foot it is 05kms away from Narendranagar township and at a distance 03kms from the Hindolakhal bus stand. There is a road for jeep and taxi to reach the temple from this place. Panoramic views of the Rishikesh valley and the snow clad Himalayan peaks can be seen.

VASHISHT CAVE
This ancient cave is situated at a distance of 25kms from Rishikesh on the road Devprayag.This cave is the place of penance by sage Vashisht.
Posted by Saahil at 14:52