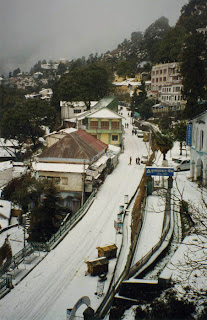 Initially Mussoorie was constructed as a shooting lodge in 1825 when an adventurous British military officer Captain Young and Mr. Shore, the resident Superintendent of Revenues at Dehradun explored the nearby regions of the present site. Soon Mussoorie became a popular holiday resort and a hill station because of its undying charm of its beauteousness. In 1827 a sanitorium was built at Landour, which later became a large cantonment. In 1901 the population of Mussoorie was 6461 which rose to 15,000 in the summer season when the people from plains visited here in order to escape the hot and sultry conditions. The number of tourists visiting Mussoorie kept on increasing every year and thus Mussoorie became popular day by day. Previously, Mussoorie was approachable by road from Saharanpur (93 km) away. Accessibility became easier in 1900 with the railway coming to Dehradun, thus shortening the road trip to 34 km. In present date Mussoorie is very well connected by all means of transportation. Mussoorie is one of the most frequently visited hill station and holiday spot and has very few competent tourist spots. After the discovery of Musoorie, this hill station gradually developed as a centre of tourism, education, business and beauty.


In April 1959, after fleeing Chinese occupation of Tibet, the Dalai Lama established the Tibetan Government in Exile in Mussoorie. The Government of Tibet in exile eventually moved to Dharamsala in Himachal Pradesh. The first Tibetan school was established in Mussoorie in 1960. Presently around 5,000 Tibetans live in Mussoorie.

Mussoorie is suffering now from over-development of hotels and tourist lodges and has serious problems of garbage collection, water scarcity and parking shortages and particularly during the summer tourist season. 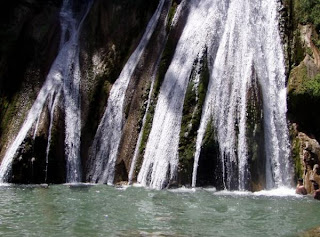 Mussoorie, located some 250 miles north of Delhi, capital of India, is among the most popular hill stations of India, and is called the Queen among the hill stations. It overlooks the sprawling Doon valley and the city of Dehradun, the gateway to Mussoorie and infact to the entire Garhwal.

Mussoorie, a hill resort at a height of around 7000 ft above the sea level, straddles a ridge in the Garhwal Himalayas â€“ a region which is developing into a major tourism destination. The holy and mighty river Ganga is visible from one end of the ridge and another famous river Jamuna from the other, a stretch of around twelve miles in all, from Cloudâ€™s end in the west to Jabarkhet in the east.

Although Mussoorie, as a hill station was established only as back as in 1823, it has quite an intriguing past.

An idyllic stroll through any of the meandering mountain roads of the town on a clear and sunny day will bring you to some of the well known and not so well known spots â€“ each having its own tales to tell â€“ Landour Bazaar, Chaar dukaan, Lal tibba, Gun hill, the Camel Back cemetery, the Mussoorie Library, and of course the hotel Savoy â€“ an historical edifice in itself. You may be able to recognise any or all of the old houses and estates or you may meet some descendant of any of the many well â€“ known families of Mussoorie.

Apart from its own quiet charm, Mussoorie also boasts of spectacular views of the Himalayas. Hill ridges, irregular in shape and partly wooded, form layer after layer to the horizon, where snow peaks are visible as if you can touch them. From west to east, the mighty peaks of Bandarpoonch, Srikantha, the Gangotri group and the Chaukhamba.

The weather is generally bright and clear â€“ except during the three months ( June to August) of Monsoons,- when mists envelope the mountain slopes and paints the sky in a mauvish glow and the woods around â€“ of pine, cedar, birch, oak, rhododendron and deodar â€“ turns greener. There usually is a bright Christmas and the breathtaking view of the snowclad Mussoorie gives it the name â€“ the Queen among hill stations.

There are popular picnic spots in and around the town â€“ Kempty Falls in the west and Dhanolti, further up beyond the town.

History of Mussoorie: It was due to the conquest of the Garhwal and the Dehra in 1803 by the Gurkhas, under Umer Singh Thapa that indirectly Mussoorie came into being. It was natural after that that at some point of time the interest of British security would have clashed with the expansionist policies of the Gurkhas and although the immediate cause of the war was different, the war, inevitably broke out on November 1, 1814 and the Dehradun proper was evacuated of the Gurkhas by 1815 and was annexed to the district of Saharanpur by 1819. 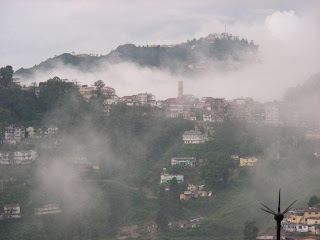 The present site of the town of Mussoorie, before the British came, there were only shepherds whose animals grazed on the â€˜Mansurâ€™ shrub which gives the town its name. It is natural to suppose that the officers locate the hills and eventually climb them here and there in search of sport and recreation. The first house erected on the ridge of Mussoorie was a small hut built on the Camelâ€™s back as a shooting box by Mr. Shore, the then Joint Magistrate and superintendent of revenues of the Doon and Captain Young of the Sirmur Rifles in 1823. Soon Captain Young built his large residence called â€˜Mullingarâ€™ as his residence as the Commandant of Landour. The splendid climate and the good sport obtainable gradually attracted other Europeans. As the Doon and the hills to the north became better known in 1827, the Government established a convalescent depot for European soldiers at Landour. The town grew rapidly and a hundred years on it had grown into a major settlement of the home â€“ sick British, away from the heat and dust of the plains. Social life had also become hectic. There were balls and parties in Landour cantonment and Polo, fetes and Riding in happy valley where the Charleville Hotel stood, the present site of LBSNAA academy.

Houses & estates of Mussoorie: Mussoorie has some lovely and charming old houses and estates, usually with names derived from the native places of those who built and lived in them. Today these old houses and estates are owned by well â€“ to â€“ do Indians , many of whom, follow the life styles of their former colonial rulers. In most cases, the old names , have been retained. Some of these old graceful houses are â€” Captain Youngâ€™s Mullingar Mansion, the oldest existing building in Mussoorie, Houses of Irish pioneers â€“ Tipperary, Killarney, Shemrock cottage and the Tara hall, the houses of Scot pioneers â€“ Scottsburn, Wolfsburn and of course the houses of the English rulers â€“ Connaught Castle, Grey castle, Hampton court and Castle hill. There evidently were a lot of fans of the legendary writer Sir Walter Scott as we find old estates of the name of Kenilworth, Rockeby, Waverly and also Abootsford â€“ the name of Sir Scottâ€™s own house in England.

Well known families of Mussoorie: There are quite a few well â€“ known families in Mussoorie, who over the times have become a part of the history, culture and the landscape of this place : the Rajmata of Jind, Princess Sita of Kapurthala, the Gantzers, the Badhwars, the Barrettos, the Skinners, the Keelans, the Alters, Lala Banwarilal, Ram Chander and brothers, Pooranchand and sons and P.C. Hariâ€™s family. Most of the shopkeepres of Mussoorie and Landour Bazaar are descended from the merchant who first came here with the british soldiers and settlers over 160 years ago.

Camel Back Cemetry: Thousands of British graves cling to the steep slopes â€“ a constant reminder of the British presence in Mussoorie. Here lie the hill stationsâ€™ first pioneers and settlers as well as Generals and common soldiers, memsahibs and their infants, schoolmasters, revered gentlemen and brewers. Here also lies John Lang, the first Australian born novelist who was Charles Dickensâ€™ India correspondent and Fredrick Wilson, better known as â€˜Pahadi Wilsonâ€™, who married a girl from Harsil. He was the first man to float timber down the Ganga river who lived a life which would have been the envy of kings. One also finds Alfred Hindmarsh, resting here â€“ a survivor of the charge of light brigade during the Crimean War and many other famous names and not so famous names
Posted by Saahil at 12:54