history of Khanate of the Golden 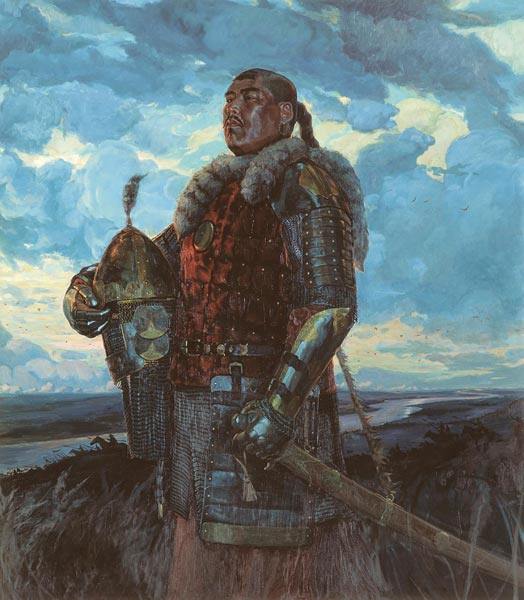 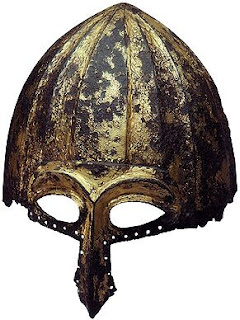 The Golden Horde is best known as that part of the Mongol Empire established in Russia. Originally, however, it consisted of the lands Genghis Khan (1165-1227) bequeathed to his son Jochi (1184-1225): the territories west of the Irtysh River (modern Kazakhstan) and Khwarazm (consisting of parts of modern Uzbekistan and Turkmenistan). Jochi, however, did not have the opportunity to expand his realm as he died in 1225, two years prior to his father's death.

During the reign of the successor of Genghis Khan, Ogodei Khan (d.1240/41), the Jochid Ulus or realm greatly expanded in size. In 1237, Jochi's son Batu (1227-1255), assisted by the famous Mongol general Subedei, led a large army westward. In route they destroyed the Bulgar khanate on the Volga River, pacified the numerous Turkic tribes of the steppes, and conquered the Russian cities. Then in 1240, Mongol armies invaded Hungary and Poland, winning victories over the knights of Europe at Mohi in Hungary and Liegnitz in Poland. As news spread of the ferocity of the Mongols, Europe trembled in anticipation of an attack that never came. In 1241 Ogodei Khan died, which forced the Mongol armies to withdraw to Russia in order to elect a new khan.

Despite an intense rivalry with Güyük Khan, Ogodei's son, Batu established the Golden Horde as a semi-independent part of the Mongol Empire. The origins of the name Golden Horde are uncertain. Some scholars believe that it refers to the camp of Batu and the later rulers of the Horde. In Mongolian, Altan Orda refers to the golden camp or palace. Altan (golden) was also the color connoting imperial status. Other sources mention that Batu had a golden tent, and it is from this that the Golden Horde received its name. While this legend is persistent, no one is positive of the origin of the term. In most contemporary sources, the Golden Horde was referred to as the Khanate of the Qipchaq as the Qipchaq Turks comprised the majority of the nomadic population in the region (the Ulus Jochid).

Batu died in 1255, and the next significant ruler was his brother Berke (1255-1267) who had converted to Islam and focused most of his energies against the Il-Khans of Persia. His conversion marked the first time an important leader among the Mongols abandoned the traditional shamanistic religion. Hulegu, the founder of the Mongol Il-Khanate, had sacked Baghdad in 1258 and killed the Caliph of Islam. Berke forged an alliance with the Mamluks of Egypt who were also enemies of the Il-Khans. The war with the Il-Khans lasted until the final collapse of the Il-Khanate in 1334.

The third ruler was Mongke Temur (1266-1279), who continued much as his predecessors did: warring against the Il-Khans. In addition, the Golden Horde increasingly dominated trade and was the most powerful state in Europe, often exerting its influence with threats of invasion into Poland and Hungary, or through its vassal, Bulgaria. After Mongke Temur's death, many of the khans became puppets controlled by generals, such as Nogai (d. 1299). 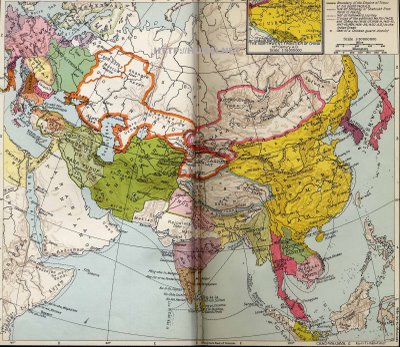 Between 1313 and 1341 during the rule of Uzbek Khan, the Golden Horde reached its pinnacle in terms of wealth, trade, influence, and military might. Uzbek Khan also forced the conversion of the Golden Horde to Islam, thus the cities of Sarai and New Sarai emerged as major Muslim centers. During the middle of the fourteenth century, however, the Golden Horde weakened as it suffered-like much of the world-from bubonic plague, civil wars, and ineffectual rulers (between 1357 and 1370, eight khans ruled). It is even thought that bubonic plague spread to Europe after the Mongols laid siege to the port of Kaffa on the Crimean peninsula in 1346. After their own forces were stricken with plague, the Mongols catapulted their corpses over the walls into Kaffa. The ships that left Kaffa and returned to Italy carried the disease.

In addition to their wars with the Il-Khanate, the Golden Horde dominated the Russian principalities. Although much has been written about an oppressive Mongol Yoke, the Russians also reaped numerous advantages in terms of trade and protection, and eventually supplanted the Golden Horde as the dominant power in the steppes of Asia. Indeed, even after the initial invasion in the thirteenth century, the Russians viewed the Mongols as a preferred alternative to the Swedish or German crusaders existing on their western border. While the Mongols sometimes exacted onerous demands, they more or less left the Russians to their own devices. The German crusaders, surely would have forced conversion to Catholicism upon the Russians had they prevailed. The Russians' first victory was against Mamai, a general who usurped the throne of the Golden Horde. Although he sacked Moscow in 1380, he was later defeated at the battle of Kulikovo. The Russians claimed it as a major victory; but, in reality, it accomplished little as Toqtamish (1383-1391) also defeated Mamai in 1383, and then proceeded to sack Moscow again.

Toqtamish may have been able to restore the Golden Horde to its former glory-he did reunite it-but he became embroiled in a series of wars with Tamerlane (1369-1404) who emerged victorious and sacked Sarai and New Sarai. The trade routes never recovered from these disruptions, and Toqtamish died in obscurity in 1391. With the death of Toqtamish, the Golden Horde went into a downward spiral and eventually fragmented. By the middle of the 15th century, the Golden Horde had shattered into the Crimean Khanate, the Astrakhanate, the Sibir Khanate, Kazan Khanate, the Nogai Horde and the Great Horde. The final death knell came in 1480 when the Muscovites on the Ugra River defeated the Great Horde. Although the Golden Horde ended, several inner Asian nations still trace their origins to it. The Uzbeks, the Kazakhs, and, of course, the numerous Tatars of Kazan and Crimea perceive themselves as descendents of the Golden Horde. Indeed, some scholars view the rise of Moscow and the Russian Empire as an heir to the legacy of the Golden Horde.


The Western domains of Chingisid empire, known as Golden Horde was bequeathed to his (Genghis Khan's) son Jochi(1184-1225), but it was Jochi’s son, Batu(1227-1255) who expanded it from the Northern China to the Carpathians, including Ural-Idil region, Muscovy, Kiev and the Crimea. Batu Khan’s invasion of Hungary and Germany in 1240 constituted the last of the Mongolian invasions. Batu Khan established the Golden Horde Khanate with its capital at Sarai, on lower Volga, under the suzerainty of Great Khan in Karakorum. The Golden Horde seems to be the Russian name for the empire, in Turkic sources it was called the White Horde(Aq Orda). In some sources, it is referred as the “Khanate of Qipchak” as the Qipchak Turks were predominant in numbers, and the Mongols constituting the ruling minority. The Golden Horde did not remain as a nomadic empire, soon after it was founded it developed a complex bureaucracy to rule over settled societies. It became the most powerful state in Europe and dominated trade.
Although Russian principalities and Muscovy had paid tribute to Golden Horde for 240 years, the Russians have had numerous advantages such as trade and protection under the Golden Horde, and eventually replaced it in the northern steppes inheriting its economic and political structures. The Golden Horde approach to rule was pragmatic: They did not seek to impose their view of the world over their subjects, interfere in their religions and cultural life, and preferred indirect rule through local dynasties where possible.
The predominant religion of the Qipchaks in the Golden Horde was largely Shamanism although there were some Turkic groups who practiced Judaism or Christianity. Berkei Khan(1255-1267) is the first khan who converted to Islam, but Islam was widely established only under the reign of Ozbeg Khan(1313-1340). Its acceptance by all Tatars was completed in the beginning of 15 th century.