History of Romeo and juuliet 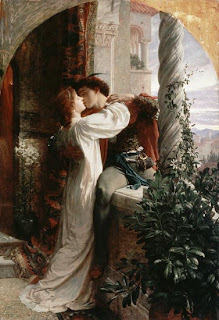 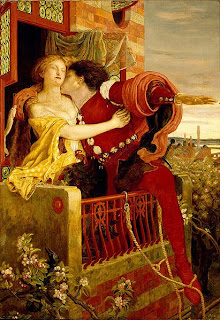 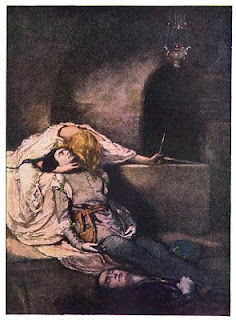 Romeo and Juliet is an enduring tragic love story written by William Shakespeare about two young star-crossed lovers whose deaths ultimately unite their feuding families. Shakespeare borrowed his plot from an original Italian tale.  It is believed Romeo and Juliette were based on actual characters from Verona.

The Montague and Capulet families are feuding.  The Prince of Verona intervenes and declares that any further fighting will be punishable by death.

When the Count of Paris approaches Lord Capulet about marrying his daughter, Juliet, he is wary of the request because she is only thirteen.  Capulet asks the Count of Paris to wait another two years and invites him to attend a ball.  Lady Capulet and Juliet's nurse urge Juliet to accept Paris' courtship.

In the Montague house, Benvolio talks with his cousin Romeo, Lord Montague's son, about Romeo's recent melancholy.  Benvolio discovers Romeo's unrequited infatuation for a girl named Rosaline, a niece of Lord Capulet's nieces.  Persuaded by Benvolio Romeo attends the ball at the Capulet house in hopes of meeting Rosaline.  But it is not Rosaline who sweeps him off his feet - it is the fair Juliette.

After the ball, Romeo sneaks into the Capulet courtyard and overhears Juliet on her balcony vowing her love to him in spite of her family's hatred for his family.  Romeo makes himself known to her and they agree to be married.

With the help of a friar, who hopes to reconcile the two families through their children's union, they are secretly married the next day.

Juliet's cousin Tybalt, incensed that Romeo had crashed the Capulet ball, challenges him to a duel.  Romeo, now considering Tybalt his kinsman, refuses to fight.  Romeo's friend, Mercutio is offended by Tybalt's insolence, as well as Romeo's "vile submission" and accepts the duel on Romeo's behalf.  Mercutio is fatally wounded when Romeo attempts to break up the fight.  Grief-stricken and wracked with guilt, Romeo confronts and slays Tybalt.

Montague argues that Romeo has justly fought and killed Tybalt for the murder of Mercutio.  The Prince exiles Romeo from Verona and declares that if Romeo returns, he will be executed.

Romeo secretly spends the night in Juliet's chamber, where they make love for the first and last time, consummating their marriage.  In the morning, he prepares to leave and kisses her one last time.

Lord Capulet, misinterpreting Juliet's grief, agrees to marry her to Count Paris and threatens to disown her when she refuses.  Juliette pleads for the marriage to be delayed, but her mother rejects her.

Juliet visits Friar Laurence for help, and he offers her a drug that will put her into a death-like coma for forty-two hours.  The Friar promises to send a messenger to inform Romeo of the plan, so that he can rejoin her when she awakens.  On the night before her wedding to the Count, Juliet takes the drug and, when discovered apparently dead, she is laid in the family crypt.

The messenger, however, failed to reach Romeo and, instead, he learned of Juliet's apparent demise from his servant.  Heartbroken, Romeo buys poison from an apothecary and goes to the Capulet crypt.  There, he encounters Count Paris who has come to mourn Juliet privately.

Believing Romeo to be a vandal, Paris confronts him and, in the ensuing battle, Romeo kills Paris.  Still believing Juliet to be dead, Romeo drinks the poison.

Juliet then awakens only to find her beloved Romeo dead.  Unwilling to live without him, she stabs herself with his dagger.
The feuding families and the Prince meet at the tomb to find all three dead.  The Friar recounts their story.  The families are reconciled by their children's deaths and agree to end their violent feud.


THE HISTORY OF ROMEO AND JULIET
By: William J. Rolfe

The earliest edition of Romeo and Juliet, so far as we know, was a quarto printed in 1597, the title-page of which asserts that "it hath been often (with great applause) plaid publiquely." A second quarto appeared in 1599, declared to be "newly corrected, augmented, and amended."

Two other quartos appeared before the folio of 1623, one in 1609 and the other undated; and it is doubtful which was the earlier. The undated quarto is the first that bears the name of the author ("Written by W. Shake-speare"), but this does not occur in some copies of the edition. A fifth quarto was published in 1637.

The first quarto is much shorter than the second, the former having only 2232 lines, including the prologue, while the latter has 3007 lines. Some editors believe that the first quarto gives the author's first draft of the play, and the second the form it took after he had revised and enlarged it; but the majority of the best critics agree substantially in the opinion that the first quarto was a pirated edition, and represents in an abbreviated and imperfect form the play subsequently printed in full in the second. The former was "made up partly from copies of portions of the original play, partly from recollection and from notes taken during the performance;" the latter was from an authentic copy, and a careful comparison of the text with the earlier one shows that in the meantime the play "underwent revision, received some slight augmentation, and in some few places must have been entirely rewritten." A marked instance of this rewriting--the only one of considerable length--is in ii. 6. 6-37, where the first quarto reads thus (spelling being modernized):

ROMEO: My Juliet, welcome. As do waking eyes
Closed in Night's mists attend the frolick Day,
So Romeo hath expected Juliet,
And thou art come.

JULIET: I am, if I be Day,
Come to my Sun: shine forth and make me fair.

FRIAR: Come, wantons, come, the stealing hours do pass,
Defer embracements till some fitter time.
Part for a while, you shall not be alone
Till holy Church have joined ye both in one.

For convenient comparison I quote the later text here:

JULIET: Good even to my ghostly confessor.

FRIAR LAURENCE: Romeo shall thank thee, daughter, for us both.

JULIET: As much to him, else is his thanks too much.

ROMEO: Ah, Juliet, if the measure of thy joy
Be heap'd like mine and that thy skill be more
To blazon it, then sweeten with thy breath
This neighbour air, and let rich music's tongue
Unfold the imagin'd happiness that both
Receive in either by this dear encounter.

JULIET: Conceit, more rich in matter than in words,
Brags of his substance, not of ornament.
They are but beggars that can count their worth;
But my true love is grown to such excess
I cannot sum up half my sum of wealth.

FRIAR LAURENCE: Come, come with me, and we will make short work;
For, by your leaves, you shall not stay alone
Till holy church incorporate two in one.

The "omission, mutilation, or botching" by which some editors would explain all differences between the earlier and later texts will not suffice to account for such divergence as this. "The two dialogues do not differ merely in expressiveness and effect; they embody different conceptions of the characters;" and yet we cannot doubt that both were written by Shakespeare.

But while the second quarto is "unquestionably our best authority" for the text of the play, it is certain that it "was not printed from the author's manuscript, but from a transcript, the writer of which was not only careless, but thought fit to take unwarrantable liberties with the text." The first quarto, with all its faults and imperfections, is often useful in the detection and correction of these errors and corruptions, and all the modern editors have made more or less use of its readings.

The third quarto (1609) was a reprint of the second, from which it "differs by a few corrections, and more frequently by additional errors." It is from this edition that the text of the first folio is taken, with some changes, accidental or intentional, "all generally for the worse," except in the punctuation, which is more correct, and the stage directions, which are more complete, than in the quarto.

The date of the first draft of the play has been much discussed, but cannot be said to have been settled. The majority of the editors believe that it was begun as early as 1591, but I think that most of them lay too much stress on the Nurse's reference (i. 3. 22, 35) to the "earthquake," which occurred "eleven years" earlier, and which these critics suppose to have been the one felt in England in 1580.

Aside from this and other attempts to fix the date by external evidence of a doubtful character, the internal evidence confirms the opinion that the tragedy was an early work of the poet, and that it was subsequently "corrected, augmented, and amended." There is a good deal of rhyme, and much of it in the form of alternate rhyme. The alliteration, the frequent playing upon words, and the lyrical character of many passages also lead to the same conclusion.

The latest editors agree substantially with this view. Herford says: "The evidence points to 1594-1595 as the time at which the play was substantially composed, though it is tolerably certain that some parts of our present text were written as late as 1596-1598, and possibly that others are as early as 1591." Dowden sums up the matter thus: "On the whole, we might place Romeo and Juliet on grounds of internal evidence, near The Rape of Lucrece; portions may be earlier in date; certain passages of the revised version are certainly later; but I think that 1595 may serve as an approximation to a central date, and cannot be far astray."

For myself, while agreeing substantially with these authorities, I think that a careful comparison of what are evidently the earliest portions of the text with similar work in Love's Labour's Lost (a play revised like this, but retaining traces of the original form), The Two Gentlemen of Verona, and other plays which the critics generally assign to 1591 or 1592, proves conclusively that parts of Romeo and Juliet must be of quite as early a date.

The earliest reference to the play in the literature of the time is in a sonnet to Shakespeare by John Weever, written probably in 1595 or 1596, though not published until 1599. After referring to Venus and Adonis and Lucrece, Weever adds:

Romeo, Richard, more whose names I know not,
Their sugred tongues and power attractive beuty
Say they are saints...