>History of the Dinosaur Collection 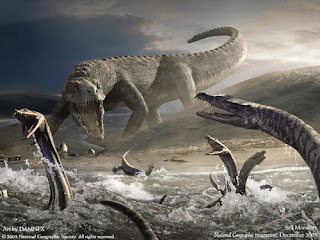 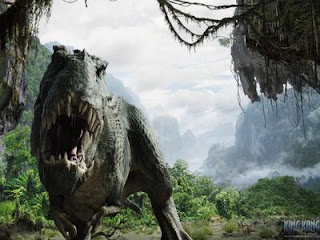 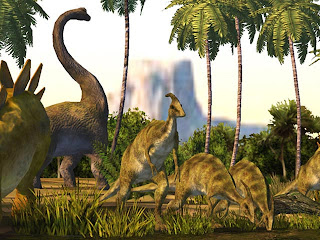 The first significant dinosaur fossils added to the museum’s collections were the type specimen of the sauropod Dystrophaeus viaemalae, collected by J. S. Newberry and donated in 1859, and Lower Jurassic dinosaur footprints from the Connecticut Valley, donated in 1861. These fossils were catalogued along with all other vertebrates in the Department of Osteology. It was not until 1887 that the Department of Vertebrate Fossils was established, and given its own catalogue system. The acronym for the “U. S. National Museum” (USNM) became part of our official designation for specimen catalogue numbers, and remains so even though our name has been changed to the National Museum of Natural History. 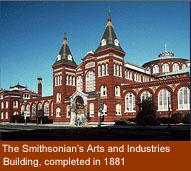 The honorary head curator of this new department was the famous dinosaur paleontologist O. C. Marsh of Yale University, and he was assisted by Frederic Lucas, who was based in Washington, D.C. Marsh led active field expeditions for both Yale University and the U. S. Geological Survey. During Marsh’s lifetime, these fossils were reposited at Yale, but upon his death in 1899, all the vertebrate fossils he had collected for the government (over 80 tons!) were transferred to the Smithsonian Institution. Marsh’s collections include some of the most important dinosaurs known to science, among them our exhibit specimens of Allosaurus, Stegosaurus, Camptosaurus, Ceratosaurus, Triceratops, and Edmontosaurus. The “Marsh Collection” still constitutes the largest single dinosaur collection at the Smithsonian.

In 1898, J. W. Coleman was hired as the first full-time preparator of vertebrate fossils. He was joined in 1900 by Alban Stewart. They soon left government service and were replaced by Charles W. Gilmore (1903), Norman H. Boss (1904) , and James W. Gidley (1905). In 1908, Gilmore was promoted to Custodian of Fossil Reptiles, and in 1924 he was again promoted to the rank of Curator. While at the Smithsonian, Gilmore became one of the most renowned vertebrate paleontologists of the twentieth century, and with him Norman Boss mounted most of the museum’s famous dinosaur exhibits.

Gilmore led sixteen dinosaur expeditions during his tenure as Curator, mostly to Wyoming and Utah, and the collections he brought back to the Smithsonian Institution included Diplodocus, Camarasaurus, and Brachyceratops. He also studied the Marsh Collection extensively, producing important studies of the dinosaurs Camptosaurus, Allosaurus, Ceratosaurus, Stegosaurus, and Thescelosaurus. The first complete, fully mounted dinosaurs to be exhibited by Gilmore and Boss were Edmontosaurus in 1903, followed by Triceratops in 1905, both in the Arts and Industries Building.

The Establishment of the Smithsonian Institution

In 1846 Congress established the Smithsonian Institution, an organization dedicated to the “...increase and diffusion of knowledge.” At this time Congress transferred the National Cabinet of Curiosities to the nascent institution. Part of the act of Congress that created the Smithsonian also mandated that “...all of objects of natural history, plants, and geological and mineralogical specimens belonging or hereafter to belong to the United States” would become the property of the Smithsonian Institution. This made it a Trust Entity, to act on behalf of the United States as the national treasury for its official objects. The Institution’s first building, commonly known as “The Castle”, was completed in 1855, and housed all Smithsonian operations and collections.

In 1879 the Sundry Civil Act further expanded the role of the Institution so that “...all collections of rocks, minerals, soils, fossils, and objects of natural history, archaeology, and ethnology, made by the Coast and Interior Survey, the Geological Survey, or by any other parties for the government of the United States, when no longer needed for investigations in progress, shall be deposited in the National Museum.” The Arts and Industries building has the special designation as the original United States National Museum. This building opened in 1881 and was the home of the first exhibition of the Section of Vertebrate Paleontology.

Prior to 1870, many of the early vertebrate fossils collected by the Smithsonian and other government agencies were sent to Dr. Joseph Leidy in Philadelphia. Leidy is considered to be the “father” of American vertebrate paleontology for the United States, and described many of the first dinosaur fossils found in the United States. His most famous discovery was that of the hadrosaurid Hadrosaurus, at Haddonfield, New Jersey. As the first dinosaur skeleton found in the U. S., it formed the basis for a full-scale model by sculptor Waterhouse Hawkins. One such model stood in the Smithsonian’s first paleontological exhibit, alongside a model of the ground sloth Megalonyx.

In 1910, the current U. S. National Museum (USNM) opened on the north side of the National Mall. The dinosaur collections were moved across the mall to this new museum, where they have been housed ever since. The mounts of Edmontosaurus and Triceratops were also relocated to become part of the new Hall of Extinct Monsters. There they were joined by new mounts of Ceratosaurus (1910), Camptosaurus (1911), two individuals of Stegosaurus (1913 and 1918), Thescelosaurus (1914), Brachyceratops (1920), and Diplodocus (1931). The Diplodocus skeleton was seventy feet long, and visitors were allowed to walk underneath the skeleton, making it the most popular exhibit for over twenty years. 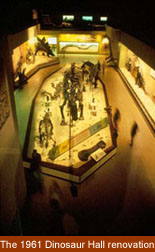 With Gilmore’s retirement in 1945, the position of Curator of Lower Vertebrates was filled for the first time by a Ph.D. in vertebrate paleontology, Charles Gazin (whose specialty was Cenozoic vertebrates, not dinosaurs). If fact, between 1941 and 2003 the USNM (now the National Museum of Natural History) hired six curators in vertebrate paleontology, none of whom specialized in dinosaurs.
One of these curators, Nicholas Hotton III, undertook the first major renovation of the dinosaur hall in the early 1960s. This hall utilized all the existing mounts and added one more, the specimen of Gorgosaurus (completed in 1960) currently exhibited on the north wall. Although most of the dinosaur skeletons were unchanged, the hall itself was substantially redesigned and reorganized. This hall opened to the public in 1963, and while the visiting public was no longer allowed to walk under the Diplodocus, there was now a sauropod femur that they were allowed to touch.

The hall closed again in 1979 as planning began for a new hall that would highlight the museum’s collections as part of “Fossils: The History of Life”. Again, all of the existing dinosaur mounts were kept, but rearranged to suit the new design of the exhibit. One new mount, Allosaurus, was constructed and integrated into a central exhibit of Late Jurassic dinosaurs. This new hall was opened in December,1981, and remains the centerpiece of the Smithsonian’s paleontology exhibit.

Modern Times at the National Museum of Natural History 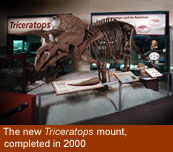 Since then, two of our exhibit specimens have been removed for conservation. After nearly a century of exhibition, many of the dinosaur bones had begun to crack due to the vibrations from millions of visitors and the great changes in ambient humidity. Without replacement, the specimens may have undergone a “second extinction.” In 2000, the Triceratops mount was the first to be conserved, and the original bones were repaired and placed in the collections. The mounted skeleton was replaced by plaster casts, now in a more scientifically accurate pose. In 2003 our Stegosaurus was also conserved and replaced with a mount that was designed to be responsive to the Allosaurus directly behind it. In 2004 we begin the same process on our Camptosaurus, which will return to display in 2005.

In addition to exhibit additions and changes, dinosaur research in dinosaur paleontology has undergone a revitalization in the last thirty years. In 1979 the Smithsonian Institution hired Michael K. Brett-Surman as a Collections Specialist, and in 1988 he became the first Smithsonian employee to obtain a Ph.D. in dinosaur paleontology. In 1992 the first of a series of new dinosaur expeditions was begun, to the Big Horn Basin in Wyoming. These new collections include dinosaur footprints (Jurassic), bones (Jurassic and Cretaceous), and eggshells (Jurassic).

In 2003 the Smithsonian Institution hired Dr. Matthew T. Carrano as its first dinosaur specialist since Gilmore’s time, and its first official Curator of Dinosaurs. He recently led expeditions to the Big Horn Basin of Wyoming to collect Late Jurassic and Early Cretaceous dinosaurs, as well as to the Cretaceous deposits of Madagascar.