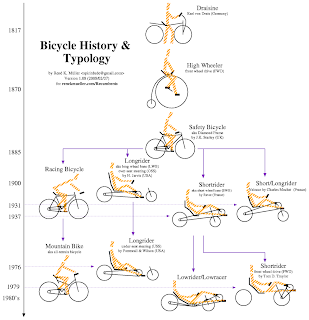 Today, the bicycle is the primary transportation of the human race. About 1.6 billion bicycles are in use throughout the world - in cosmopolitan cities, along remote country lanes, and in the smallest villages - and hundreds of millions of bikes are manufactured every year to meet the continuing demand for cheap wheeled transport.
Yet the bicycle is hardly a new vision of how humans can move. Historians speculate about Leonardo da Vinci's 1490s drawings and a 1580s stained glass window in England that appear to depict a two-wheeler. The first widely recognized two-wheeler in actual use, however, was the pedal-less Celerifere, a toy of the French nobility in the 1790s. The more famous Draisienne followed that toy in 1816, still without pedals. The front wheel could be steered, and this two-wheeler was eventually mass-produced in Europe, particularly in England. Ernest Michaux added cranks to the two-wheeler in 1855. At the age of 14, Michaux copied the crank from a hand-grinding wheel in his father's locksmithy and started a revolution in human transportation - the Velocipede. 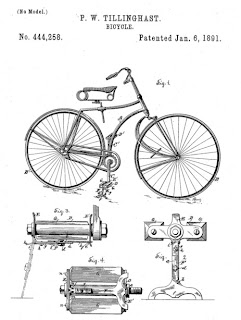 By 1870, sophisticated metal Velocipedes were in production in Europe and the United States. Over time, they gave way to the Ordinary or high-wheeler. The Ordinary was the beginning of the heyday of bicycling. It was speedy and capable of long trips on poor roads, so its use spread fast and far. In a day when a skilled person might earn 25 cents per hour in wages, a good Ordinary sold for $75 to $125, making it more expensive than building a house. Nevertheless, they sold at a furious pace.
Ordinaries had a big problem, however. When the front wheel came up against any obstacle that it could not roll over, the bike simply pitched the rider headfirst onto the ground. Called a "header," this characteristic problem spawned the "safety bicycle" in the 1890s. With two wheels of equal size, plus a roller chain geared transmission, the safety bicycle was the direct ancestor of today's machines. Not only were these practical machines, but also, with a slight adaptation, they attracted thousands of women to cycling.
Now having transportation that did not need assistance from anyone, women gained a larger measure of freedom than they had enjoyed. The bicycle revolutionized female attire, making it a subject of controversy. Schools sprang up to teach women to ride. Many historians point to the safety bicycle as the beginnings of suffrage, women's rights, and feminism.
Brakes, lights, innovative tires and inventions of every sort were created to accompany the safety bicycle. In fact, patents filed in the 1890s laid the groundwork for a startling number of "state of the art" inventions a century later, in the 1990s. In England, in 1909, the Raleigh bicycle, equipped with a Sturmey Archer 3-Speed hub, started production. The classic 3-speed bicycles based on the Sturmey Archer 3-Speed hub design spread worldwide along with the British Empire. These designs are still in production in British-built plants in India, Africa, and China.
In the 1930s, British-built "lightweight" bicycles, suitable for the packed earth of country roads, were being imported into the United States. Used on the gravel roads of the day, lightweights were unfortunately not as sturdy as the riders in the U.S. required. The American balloon-tired cruiser bicycle, equipped with a coaster brake, emerged out of a need for unbreakable rough-road bicycles. Evolving rapidly into the "gas tank" cruisers of the 195Os, these bicycles are still in production. Now, some even are made with titanium frames and sophisticated internal hub transmissions. Yet, they would blend into any street scene of the 1950s. 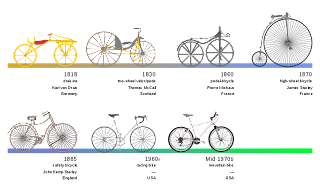 In the 1960s, the high-rise bicycle - a 20-inch wheel bicycle for children - was the success story of the decade. The Schwinn Sting-Ray was the most desired bicycle of the day, selling in tremendous volume. By the late 1960s, European lightweight derailleur-equipped bicycles began to appear in the United States. Common in Europe since the 1940s, with the Italians and the French dominating both racing and the production of high performance bicycles, the 10-speed changed the look of American cycling. The new look featured the dropped handlebar position, which also reduced drag and increased speed.
The 10-speed bicycle fueled the astonishing "Bike Boom" of the 1970s, during which Baby Boomers just reaching their physical peak pedaled throughout the United States and Canada, as well as many countries in Europe. The Japanese introduced their first 10-speeds into the United States in the early 1970s. The quality and value of their exports quickly gained them a dominant position in the marketplace - even as it drove most European makers and virtually all domestic manufacturers out of the adult bicycle market in the United States.
At the same time in the United States, BMX racing was being born in and started to hit its stride late in the decade. BMX bicycles were descendants of the high-rise bicycles of the 1960s. This exciting sport involved youthful riders racing on a short, closed dirt track. In the early 1980s, a few California riders started putting derailleur gears on old balloon-tire cruisers and riding them down steep mountain roads. The bicycles they created were the first mountain bikes. Those California riders, such as Gary Fisher, Tom Ritchey, and Mike Sinyard (Specialized), are now as famous as the labels on a number of popular brands of mountain bikes.
During the same period, a few American bicycle manufacturers started domestic produc­tion of aluminum and carbon fiber bicycles. Superior products resulted in rapid growth and helped unseat Japanese bicycle companies, who till then had held a dominant position. This new U.S. production, combined with the emergence of Taiwan and China as quality lower price bicycle builders, emphasized the worldwide nature of the bicycle business in the 1980s and 90s.
The early 1980s saw the creation of the "Freestyle" or trick bicycle. Originally a street sport, riding it grew into a jaw-dropping spectacle of flying, leaping bicycles and dancing riders. ESPN, ESPN2, and other television networks often feature this "X-treme" new sport. Now in the late 1990s, the hybrid bicycle, the road bike, and the mountain bike have proved to be the dominant machines of the decade. In the near future, electrically assisted bicycles, recumbent bicycles, and aerodynamic chassis for bicycles promise new levels of comfort, speed, and efficiency for bike lovers.
From their beginning, bicycles have been high technology. The steel two-wheelers of the 1860s were the most sophisticated machines of their day. The ball bearing, the tensioned spoked wheel, seamed and seamless tubing, pneumatic tires, roller chains, planetary gears, and many more key mechanical inventions were first created for the bicycle, and some even percolated out to improve other devices that people find useful. Today, the bicycle continues to be the most energy and cost efficient transportation device in the world. Bikes are still high technology. They are made from the most advanced materials, with bicycle builders using the same materials and techniques that the most advanced military aircraft use.