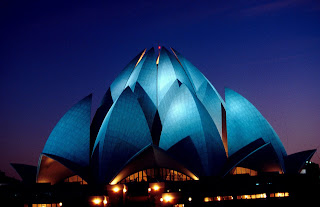 Lotus Temple is one of the remarkable architectures of Bahai faith. It is located at Kalkaji in New Delhi. The temple looks like a lotus flower and is made of marble, cement, dolomite and sand. The temple has no restrictions for visitors and is open to people from all religions. The place provides immaculate environment for meditation, peace and wisdom. The Bahai temple was completed in 1986. Since then the temple has received recognition from all over the world for its splendid architecture and design. Lotus Temple is among the most visited monuments in India. The credit for building this beautiful structure goes to the Persian architect Fariborz Sahba from Canada.
Personifying Lotus in the temple does not merely mean giving a lotus shape to the edifice but it has a message to the people of India in the form of a manifestation from the almighty. Lotus is a symbol of peace, purity, love and immortality. It is this particular specialty of Lotus flower which makes the flower an important icon in Indian culture and society. This is why the design of Lotus temple has been inspired by lotus flower.....

The design looks like a half opened Lotus flower with 27 freestanding "petals" made of marble. The architect, while designing the temple took into account the eternal beauty of Lotus flower. The construction work took almost 10 years before it finally got shape and was open for public. The team comprised of 800 engineers, technicians, workers and artisans who worked diligently to give realization to one of the most complex edifices in the world. The temple integrates the aesthetic values along with the technological influence within the whole structure. There are nine reflecting pools that encompass the temple from outside. Converting the geometry of the design that did not have any straight line to the actual structure needed a lot of effort and dedicated engineering.
The temple has the capacity to accommodate nearly 2500 people and has nine doors that open in a central hall. The whole structure is made of white marble that adds to the glory of the temple. It is about 40 meters tall surrounded by nine ponds and appears as if the temple is floating like a Lotus flower in water. 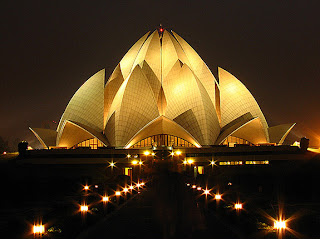 The most appraising aspect of this particular architectural masterpiece is the integration of the effervescent Indian history along with the modern engineering and architecture. The temple has to its accreditation being recognized all over the world as one of the most visited edifices in the world with almost 50 million people having visited the temple since its inception in 1986.

Award given to the architect Mr. Sabha in the year 1987 from International Federation for Art and Architecture, USA.
Award for the structural design by the Institute of Structural Engineers in UK
The Citation Award for personifying the visual impact of the beautiful Lotus flower.
Accreditation for its outdoor illumination in the year 1988
American Concrete Institute Award for being one of the most artistically built concrete structures.
In the year 2000 it received the "Glob Art Academy Award" from Glob Art Academy in Vienna.
So, whenever you visit Delhi, do not forget to see this particular masterpiece which offers a strong message of wisdom, peace and tranquility.

Fariborz Sahba, Canadian architect of Iranian origin, spent 10 years in designing and project management, and with the help of a team of about 800 engineers, technicians, artisans and workers brought to realization one of the most complicated constructions in the world. The structure of the House is composed of three ranks of nine petals; each springing from a podium elevating the building above the surrounding plain. The first two ranks curve inward, embracing the inner dome; the third layer curves outward to form canopies over the nine entrances. The petals, constructed of reinforced white concrete cast in place, are clad in white marble panels, performed to surface profiles and patterns related to the geometry. Nine arches that provide the main support for the superstructure ring the central hall. Nine reflecting pools surround the building on the outside, their form suggesting the green leaves of the lotus flower. Translating the geometry of the design, in which there are virtually no straight lines, into the actual structure presented particular challenges in designing and erecting the framework. Not only was it difficult to align, so as to produce accurately the complex double-curved surfaces and their intersections, but also the closeness of the petals severely restricted workspace. Nevertheless the task was carried out entirely by the local laborers. Thanks to each one who contributed in its construction. To avoid construction joints, petals were concreted in a continuous operation for approximately 48 hours. Concrete was carried up the staging by women bearing 50-pound loads in baskets balanced on their heads. All the steel reinforcing for the shells of the lotus petals was galvanized to avoid rust stains on the white concrete in the prevailing humid conditions, guaranteeing the life of the delicate shell structure of 6 to 18 cm thick shells of the petals. India is well endowed with human resources.

SIGNIFICANCE OF THE DESIGN
The lotus represents the Manifestation of God, and is also a symbol of purity and tenderness. Its significance is deeply rooted in the minds and hearts of the Indians. In the epic poem Mahabharata, the Creator Brahma is described as having sprung from the lotus that grew out of Lord Vishnu's navel when that deity lay absorbed in meditation, There is a deep and universal reverence for the lotus, which is regarded as a sacred flower associated with worship throughout many centuries. In Buddhist folklore the Boddhisatva Avalokiteswara is represented as born from a lotus, and is usually depicted as standing or sitting on a lotus pedestal and holding a lotus bloom in his hand. Buddhists glorify him in their prayers, "Om Mani Padme Hum", "Yea, 0 Jewel in the Lotus!" Lord Buddha says you have to be like a lotus which, although living in dirty water, still remains beautiful and undefiled by its surroundings. So, we realise that the lotus is associated with worship, and has been a part of the life and thoughts of Indians through the ages. It will seem to them as though they have been worshipping in this Temple in their dreams for years. Now their vision has become a reality and. God willing, some day they will all enter and worship in it. History of the BahÃ¡'Ã­ Faith in India: The history of the BahÃ¡'Ã­ Faith in India started with the inception of the Faith in Iran when the BÃ¡b (literally, the Gate) inaugurated a new era in the history of the human race. The BÃ¡b Himself had appointed one of the Indian believers as the 'Letter of Living' in 1844-45, the first year of His Ministry. Since then, India is spiritually connected with the BahÃ¡â€™i Faith.

As foretold by the BÃ¡b, the Promised One of all ages and peoples, BahÃ¡â€™uâ€™llÃ¡h (literally the Glory of God) revealed Himself in 1863. He, Himself, dispatched one of the distinguished BahÃ¡'Ã­ teachers, Jamal Effendi, to teach the Cause of God in the years 1874-75. Jamal Effendi (left) traveled to many States and was successful in attracting many learned people and few Navaabs (ruler of the states) including the Navaab of Rampur State (now in U.P.) to the Faith. One young man who accepted was Syed Mustafa Roumi who later became distinguished in his manifold services and was appointed as a Hand of the Cause of God. Some of them accepted BahÃ¡â€™uâ€™llÃ¡h as the Universal Manifestation of God whose advent has been prophesied in all the Holy Scriptures. The other teachers who came to India during BahÃ¡â€™uâ€™llÃ¡h's Ministry included Mishkin Qalam, the distinguished BahÃ¡'Ã­ Calligrapher. A series of teachers from the East and the West continued visiting India and traveling throughout the country during the time of â€˜Abduâ€™l-BahÃ¡ (literally, the Servant of BahÃ¡), the much-loved Master of the BahÃ¡'Ã­ Faith. Prominent among them were Mirza Mahram and Mirza Mahmud Zarqani.