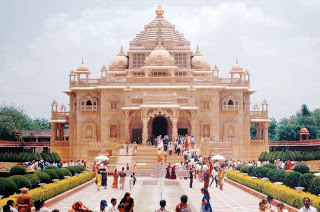 is a magnificent Hindu shrine, situated in the east region of New Delhi. Located on the banks of River Yamuna, it was inaugurated in November 2005, by the former President of India - APJ Abdul Kalam, the Prime Minister - Manmohan Singh and Pramukh Swami Maharaj - the spiritual leader of BAPS. Pramukh Swami Maharaj is the current spiritual leader of Swaminarayan Sanstha, BAPS. Swaminarayan Akshardham was constructed under his guidance, after his guru, Yogiji Maharaj, expressed a wish for the same.

As a spiritual leader, Swamiji constantly travels and meets people across the world, to help them lead better lives. There are various cultural and educational activities conducted by the Swaminarayan Sanstha. Akshardham is also a part of BAPS's initiative to promote Indian art, culture and values. BAPS also has a charitable arm, known as BAPS Care, working for the betterment of the people. The main shrine in the complex is dedicated to Bhawgwan Swaminarayan. 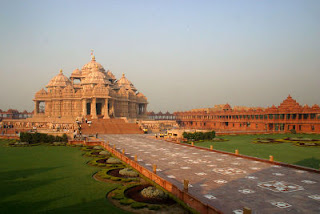 The temple enshrines 11 ft tall gilded statue of Bhagwan Swaminarayan. The building is constructed entirely from Pink Sandstone and Italian Marble, without any concrete or steel. The intricate carvings, magnanimous structure and the backdrop of River Yamuna, render the temple a masterpiece of art. Other than the main temple, there are a number of buildings in the complex where you can enjoy cultural and spiritual activities. 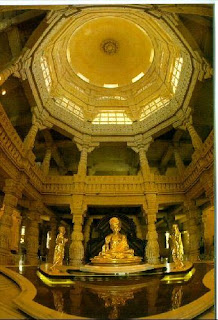 'Sahajanand Pradarshan' is the first Hall in the complex. It features life size robots, dioramas, and incidents from Bhagwan Swaminarayan's life. It also houses world's smallest animatronic robot, in the form of Ghanshyam Maharaj, the child form of Bhagwan Swaminarayan.

'Sanskruti Vihar', Hall 3, takes visitors on a journey through 10,000 years of Indian history in 10 minutes. Visitors are seated in specially designed peacock boats that make their way around an artificial river.

The Yagnapurush Kund
The Yagnapurush Kund is India's largest step well. It descends down, via a series of steps, to a traditional 'yagna kund'. At night, a musical fountain show, representing the circle of life, is played for an audience, seated on the same steps. 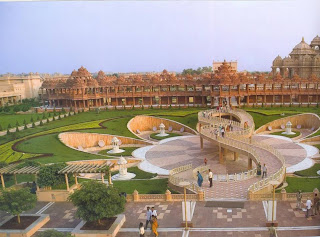 The Bharat Upavan
The Bharat Upavan, or 'Garden of India', has sprawling lawns, varied trees and shrubs, dotted with bronze sculptures of the contributors to India's culture.

The Yogi Hraday Kamal
It is a lotus shaped garden, containing stones engraved with quotes from world luminaries, ranging from Shakespeare and Martin Luther King, to Swami Vivekananda and Bhagwan Swaminarayan.