Some themes are culturally bound, others transcend boundaries and remain timeless. The story of tragic love is one such theme. Just as in the west Shakespeareâ€™s Romeo and Juliet epitomises young-love-thwarted, in the Indian Subcontinent it is symbolised by the story of Heer and Ranjha.

Heer Ranjha by the famous Pakistani artist Chugtai
Heer Ranjha is a traditional folk story of the Punjab that has become part of the Indian Subcontinentâ€™s cultural heritage. Beloved by Indians and Pakistanis alike, the story has many narrative versions, but the one that has remained most popular is Waris Shahâ€™s poetic epic Heer, which was written in 1766. A tale of two young lovers Heer and Ranjha, it recounts how Ranjha, forced to flee his ancestral home and village because of cruel treatment by his jealous sisters-in-law, falls in love with Heer at first sight. 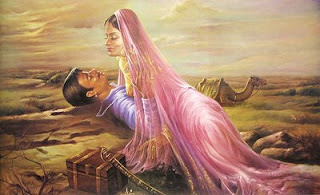 Mesmerized by his flute playing, she hires him as a cow herder on her fatherâ€™s rich estate. They begin meeting secretly, but Heerâ€™s uncle Qaido discovers them and in an effort to avoid any shame, the family hastily arranges Heerâ€™s marriage to a wealthier, older man. With great difficulty and after much suffering, Heer eventually obtains her parentâ€™s consent to marry Ranjha. Her uncle, however, cannot accept her disobeying the strictures of a patriarchal society that emphasised parental choice in marriage. Believing that by falling in love she has destroyed the family honour, he poisons her on what would have been the loverâ€™s wedding day. Ranjha arrives too late to save her and commits suicide.

Clear parallels exist between the tragedy of Romeo and Juliet and that of Heer Ranjha. Shakespeare and Waris Shah both explore the issue of whether marriage should be based on love or parental choice. Both narratives are stories of a young love so all consuming that the lovers would rather die than live without each other. In both instances it is the young girls, Juliet and Heer, who display greater strength and maturity in love. The tragedies of these young lovers are so powerful that, although not allowed to be couples in real life, their names have been forever linked together.


Bollywood film poster (2009).
The story of Heer Ranjha has been the subject of several films in India and Pakistan. The earliest film version was made in pre-Partition India in 1928 and the latest is the 2009 Bollywood production Heer Ranjha. With the continuing popularity of the tragedy, there have also been some recent theatrical productions that have modernised the traditional folk story to make it relevant to todayâ€™s world. In 2008, a British Asian production Heer Ranjha set the tragedy in Glasgow, Scotland. Ranjha is portrayed in this version as a muslim restaurant worker who is disaffected and disowned by his faith. Attempting to commit suicide by jumping off a bridge, he falls instead into the boat where Heer, the daughter of a curry-magnate, is holding a party. The play discussed the issues of forced marriages and the sectarian divide in South Asian communities. In Karachi, Pakistan, a 2009 production Ranjha and Juliet innovatively fused both Shakespeareâ€™s and Waris Shahâ€™s tragedies to come up instead with a comedy. The play cleverly explores the question of whether these two couples, immortalized as tragic lovers, would still fall in love in todayâ€™s world â€“ if their love is really eternal. As a commentary on our multi-cultural world, and with some mischievous meddling by the devil and cupid, the couplings, however, get mixed up.

The story of Heer Ranjha is believed to be based on the real life story of a remarkable young woman named Heer who took a stand not only for love, but also against the cruelty of the feudal system. Although Juliet and Heer both loved and lost, they have become a symbol of true love. Heerâ€™s grave in Jhang, Punjab, has become a site for young girls in love to visit, where praying for the successful outcome of their love they leave their bangles as an offering. Julietâ€™s balcony in Verona, Italy, although doubted as actually hers, has become a traditional tourist spot on a tour of Italy and Verona itself has become a romantic wedding destination for many couples.

Heer Ranjha (Punjabi: à¨¹à©€à¨° à¨°à¨¾à¨‚à¨à¨¾, ÛÛŒØ± Ø±Ø§Ù†Ø¬Ú¾Ø§, hÄ«r rÄÃ±jhÄ) is one of the four popular tragic romances of the Punjab. The other three are Mirza Sahiba, Sassi Punnun and Sohni Mahiwal. There are several poetic narrations of the story, the most famous being 'Heer' by Waris Shah written in 1766. It tells the story of the love of Heer and her lover Ranjha. The other poetic narrations were written by Damodar Daas, Mukbaz and Ahmed Gujjar among others.
Guru Gobind Singh Ji also reffered to heer ranjha in his composition called charitropakhyan.


Heer ranjha Painting
Heer Saleti was an extremely beautiful woman, born into a wealthy Jatt family of the Sayyal clan. Ranjha (his surname), his first name was Dheedo, also was a Jatt. He was the youngest of four brothers and lived in the village 'Takht Hazara' by the river Chenab. Unlike his older brothers who had to toil in the fields, young Ranjha had been doled over by his, becoming his father's favorite son. With the work being handled his father allowed him to lead a life of ease playing the flute ('Wanjhli'/'Bansuri'). After a quarrel with his brothers over land, Ranjha left home.
In Waris Shah's beloved version of the epic, Ranjha left his home because his brothers' wives refused to give him food. Eventually he arrives in Heer's village and falls in deeply in love with her at first sight. Heer offers Ranjha a job as caretaker of her father's cattle. Soon, mesmerised by the way Ranjha plays his flute, she eventually falls in love with him. They met each other secretly for many years until they were caught by Heer's jealous uncle, Kaido, and her parents Chuchak and Malki. So Heer, to save the 'honor' of her family, is forced by her family and the local priest or 'mullah' to marry another (rich, respected, older local man) named Saida Khera who lived in a distant village.
Ranjha is heartbroken. He is left to walk the quiet villages on his own until eventually he meets a 'Jogi' (an ascetic) named Baba Gorakhnath, who happens to be the founder of the "Kanphata" (pierced ear) sect of Yogis. Their meeting was at 'Tilla Jogian' (the 'Hill of Ascetics'), located 50 miles north of the historic town of Bhera, Sargodha District, Punjab, India; which since the farengis (the British) partitioned India (dividing the former kingdom of Maharaja Ranjit Singh) has been part of (Pakistan)). The heart-broken Ranjha decided to become a Jogi, piercing his ears and renouncing the material world. Reciting the name of the Lord, "Alakh Niranjan", as he traveled around the Punjab, he eventually finds the village where he is reunited with Heer.
The two returned to Heer's village, where Heer's parents agreed to their marriage. However, on the wedding day, Heer's jealous uncle Kaido had arranged for one of his servants to lace some sweets, that Ranja had sent to Heer, with a deadly poison, such was his jealousy that he would rather have her die than she her happily married to Ranja. Being told what Heer's uncle had done, Ranjha rushed to save Heer, but he was too late, as several pieces of the Laddu were missing and Heer breath her last just as he arrived. Brokenhearted once again, Ranjha finished the poisoned Laddu (a sweet) laying down to die by her side.
Heer and Ranjha are buried in a Punjabi town called Jhang, Punjab. Lovers and others often pay visits to their mausoleum.
Waris Shah's version

Waris Shahâ€™s composition, the love story of Heer Ranjha takes a pre-eminent place, in what may be called the â€˜qissaâ€™ literature of Punjab. It is the story of the youngman and a youngwomen, which did not receive the sanction of society in the shape of marriage, a major theme of literature, music, dance and drama not only in Punjab, but everywhere in the world. Witness Shakespear's Romeo and Juliet.


Sclupture Mirza Shahiban and Heer Ranjha
The story performed in the form of an opera as well as a ballet is very typical. Heer was the daughter of a feudal landlord Chuchak Sial from Jhang. Before her sacrifice for Ranjha, she proved herself to be a very courageous and daring young girl. It is said that Sardar (Chief) Noora from the Sambal community, had a really beautiful boat made and appointed a boatman called Luddan. Noora was very ruthless with his employees. Due to the ill treatment one day Luddan ran away with the boat and begged Heer for refuge. Heer gave him moral support as well as shelter.
Sardar Noora was enraged at this incident. He summoned his friends and set off to catch Luddan. Heer collected an army of her friends and confronted Sardar Noora and defeated him. When Heerâ€™s brothers learnt of this incident they told her,"If a mishap had befallen you why didnâ€™t you send for us?" To which Heer replied, "What was the need to send for all of you? Emperor Akbar had not attacked us."
It is the same Heer who, when she is in love with Ranjha, sacrifices her life for him and says, "Saying Ranjha, Ranjha all time I myself have become Ranjha.
No one should call me Heer, call me Dheedho Ranjha."
When Heerâ€™s parents arranged her marriage much against her wishes, with a member of the house of Khaidon, it is Heer who plucks up courage during the wedding ceremony and reprimands the Qazi (priest)."Qazi, I was married in the presence of Nabi (Prophet). When did God give you the authority to perform my marriage ceremony again and annul my first marriage? The tragedy is that people like you are easily bribed to sell their faith and religion. But I will keep my promise till I go to the grave."


Heer Ranjha Poster
Heer is forcibly married to Khaidon but she cannot forget Ranjha. She sends a message to him. He comes in the garb of a jogi (ascetic) and takes her away. When Heerâ€™s parents hear about the elopement they repent and send for both of them promising to get Heer married to Ranjha. But Heerâ€™s uncle Khaidon betrays them and poisons Heer.
In this love tale Heer and Ranjha do not have the good fortune of making a home. But in the folklore sung by the ladies, Heer and Ranjha always enjoyed a happy married life.
It was Heerâ€™s strong conviction, which has placed this tragic romantic tale on the prestigious pedestal along with Punjabâ€™s religious poetry.
Posted by Saahil at 17:43