History and Development of the Green Revolution 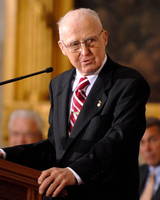 The beginnings of the Green Revolution are often attributed to Norman Borlaug, an American scientist interested in agriculture. In the 1940s, he began conducting research in Mexico and developed new disease resistance high-yield varieties of wheat. By combining Borlaug's wheat varieties with new mechanized agricultural technologies, Mexico was able to produce more wheat than was needed by its own citizens, leading to its becoming an exporter of wheat by the 1960s. Prior to the use of these varieties, the country was importing almost half of its wheat supply. 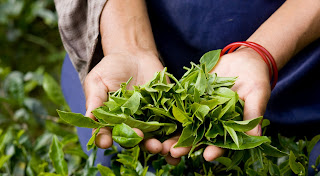 In order to continue using Green Revolution technologies to produce more food for a growing population worldwide, the Rockefeller Foundation and the Ford Foundation, as well as many government agencies around the world funded increased research. In 1963 with the help of this funding, Mexico formed an international research institution called The International Maize and Wheat Improvement Center. 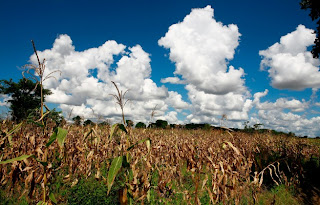 Countries all over the world in turn benefited from the Green Revolution work conducted by Borlaug and this research institution. India for example was on the brink of mass famine in the early 1960s because of its rapidly growing population. Borlaug and the Ford Foundation then implemented research there and they developed a new variety of rice, IR8, that produced more grain per plant when grown with irrigation and fertilizers. Today, India is one of the world's leading rice producers and IR8 rice usage spread throughout Asia in the decades following the rice's development in India.

Plant Technologies of the Green Revolution
The crops developed during the Green Revolution were high yield varieties - meaning they were domesticated plants bred specifically to respond to fertilizers and produce an increased amount of grain per acre planted. 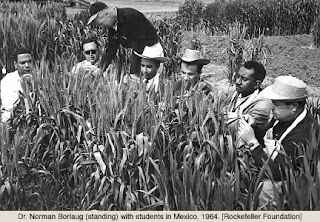 The terms often used with these plants that make them successful are harvest index, photosynthate allocation, and insensitivity to day length. The harvest index refers to the above ground weight of the plant. During the Green Revolution, plants that had the largest seeds were selected to create the most production possible. After selectively breeding these plants, they evolved to all have the characteristic of larger seeds. These larger seeds then created more grain yield and a heavier above ground weight.

Finally, by selectively breeding plants that were not sensitive to day length, researchers like Borlaug were able to double a crop’s production because the plants were not limited to certain areas of the globe based solely on the amount of light available to them.

Irrigation also played a large role in the Green Revolution and this forever changed the areas where various crops can be grown. For instance before the Green Revolution, agriculture was severely limited to areas with a significant amount of rainfall, but by using irrigation, water can be stored and sent to drier areas, putting more land into agricultural production - thus increasing nationwide crop yields.

In addition, the development of high yield varieties meant that only a few species of say, rice started being grown. In India for example there were about 30,000 rice varieties prior to the Green Revolution, today there are around ten - all the most productive types. By having this increased crop homogeneity though the types were more prone to disease and pests because there were not enough varieties to fight them off. In order to protect these few varieties then, pesticide use grew as well.

Finally, the use of Green Revolution technologies exponentially increased the amount of food production worldwide. Places like India and China that once feared famine have not experienced it since implementing the use of IR8 rice and other food varieties.

The second major criticism is that places like Africa have not significantly benefited from the Green Revolution. The major problems surrounding the use of these technologies here though are a lack of infrastructure, governmental corruption, and insecurity in nations.

Despite these criticisms though, the Green Revolution has forever changed the way agriculture is conducted worldwide, benefiting the people of many nations in need of increased food production.