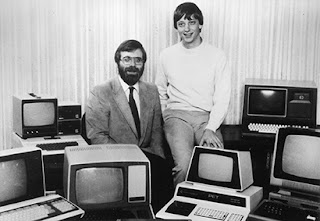 A history of Windows

It’s the 1970s. At work, we rely on typewriters. If we need to copy a document, we likely use a mimeograph or carbon paper. Few have heard of microcomputers, but two young computer enthusiasts, Bill Gates and Paul Allen, see that personal computing is a path to the future.

In 1975, Gates and Allen form a partnership called Microsoft. Like most start-ups, Microsoft begins small, but has a huge vision—a computer on every desktop and in every home. During the next years, Microsoft begins to change the ways we work.
The dawn of MS‑DOS

In June 1980, Gates and Allen hire Gates’ former Harvard classmate Steve Ballmer to help run the company. The next month, IBM approaches Microsoft about a project code-named "Chess." In response, Microsoft focuses on a new operating system—the software that manages, or runs, the computer hardware and also serves to bridge the gap between the computer hardware and programs, such as a word processor. It’s the foundation on which computer programs can run. They name their new operating system "MS‑DOS."

MS‑DOS is effective, but also proves difficult to understand for many people. There has to be a better way to build an operating system.

Microsoft works on the first version of a new operating system. Interface Manager is the code name and is considered as the final name, but Windows prevails because it best describes the boxes or computing “windows” that are fundamental to the new system. Windows is announced in 1983, but it takes a while to develop. Skeptics call it “vaporware.”

There are drop-down menus, scroll bars, icons, and dialog boxes that make programs easier to learn and use. You're able to switch among several programs without having to quit and restart each one. Windows 1.0 ships with several programs, including MS‑DOS file management, Paint, Windows Writer, Notepad, Calculator, and a calendar, card file, and clock to help you manage day-to-day activities. There’s even a game—Reversi.

1987–1992: Windows 2.0–2.11—More windows, more speed
The Windows 2.0 desktopOn December 9, 1987 Microsoft releases Windows 2.0 with desktop icons and expanded memory. With improved graphics support, you can now overlap windows, control the screen layout, and use keyboard shortcuts to speed up your work. Some software developers write their first Windows–based programs for this release.
Windows 2.0 Windows 2.0

Windows 2.0 is designed for the Intel 286 processor. When the Intel 386 processor is released, Windows/386 soon follows to take advantage of its extended memory capabilities. Subsequent Windows releases continue to improve the speed, reliability, and usability of the PC.

In 1988, Microsoft becomes the world’s largest PC software company based on sales. Computers are starting to become a part of daily life for some office workers. 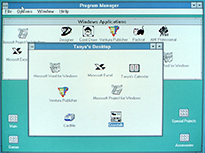 On May 22, 1990, Microsoft announces Windows 3.0, followed shortly by Windows 3.1 in 1992. Taken together, they sell 10 million copies in their first 2 years, making this the most widely used Windows operating system yet. The scale of this success causes Microsoft to revise earlier plans. Virtual Memory improves visual graphics. In 1990 Windows starts to look like the versions to come. 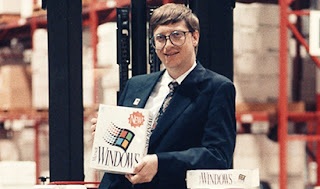 Windows is increasingly used at work and home and now includes games like Solitaire, Hearts, and Minesweeper. An advertisement: “Now you can use the incredible power of Windows 3.0 to goof off.”

When Windows NT releases on July 27, 1993, Microsoft meets an important milestone: the completion of a project begun in the late 1980s to build an advanced new operating system from scratch. "Windows NT represents nothing less than a fundamental change in the way that companies can address their business computing requirements," Bill Gates says at its release.

Unlike Windows 3.1, however, Windows NT 3.1 is a 32-bit operating system, which makes it a strategic business platform that supports high-end engineering and scientific programs. 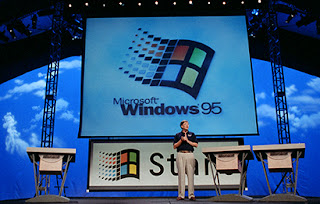 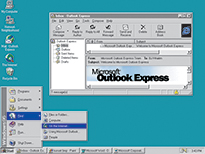 At the time of the Windows 95 release, the previous Windows and MS‑DOS operating systems are running on about 80 percent of the world’s PCs. Windows 95 is the upgrade to these operating systems. To run Windows 95, you need a PC with a 386DX or higher processor (486 recommended) and at least 4 MB of RAM (8 MB of RAM recommended). Upgrade versions are available for both floppy disk and CD-ROM formats. It’s available in 12 languages.


Windows 95 features the first appearance of the Start menu, taskbar, and minimize, maximize, and close buttons on each window.
Catching the Internet wave

In the early 1990s, tech insiders are talking about the Internet—a network of networks that has the power to connect computers all over the world. In 1995, Bill Gates delivers a memo titled “The Internet Tidal Wave,” and declares the Internet as “the most important development since the advent of the PC.”

In the summer of 1995, the first version of Internet Explorer is released. The browser joins those already vying for space on the World Wide Web.

Released on June 25, 1998, Windows 98 is the first version of Windows designed specifically for consumers. PCs are common at work and home, and Internet cafes where you can get online are popping up. Windows 98 is described as an operating system that “Works Better, Plays Better.”

With Windows 98, you can find information more easily on your PC as well as the Internet. Other improvements include the ability to open and close programs more quickly, and support for reading DVD discs and universal serial bus (USB) devices. Another first appearance is the Quick Launch bar, which lets you run programs without having to browse the Start menu or look for them on the desktop.

Geek trivia: Windows 98 is the last version based on MS‑DOS.
Windows 98 Windows 98
Windows Me
The Windows Me media experience

First appearances: System Restore, a feature that can roll back your PC software configuration to a date or time before a problem occurred. Windows Movie Maker provides users with the tools to digitally edit, save, and share home videos. And with Microsoft Windows Media Player 7 technologies, you can find, organize, and play digital media.

Geek trivia: The nightly stress test performed on Windows 2000 during development is the equivalent of three months of run time on up to 1,500 computers.
2001–2005: Windows XP—Stable, usable, and fast
The Windows XP Home Edition desktop

On October 25, 2001, Windows XP is released with a redesigned look and feel that's centered on usability and a unified Help and Support services center. It’s available in 25 languages. From the mid-1970s until the release of Windows XP, about 1 billion PCs have been shipped worldwide.

For Microsoft, Windows XP will become one of its best-selling products in the coming years. It’s both fast and stable. Navigating the Start menu, taskbar, and Control Panel are more intuitive. Awareness of computer viruses and hackers increases, but fears are to a certain extent calmed by the online delivery of security updates. Consumers begin to understand warnings about suspicious attachments and viruses. There’s more emphasis on Help and Support.

Windows XP has several editions during these years:

Windows XP Media Center Edition (2002) is made for home computing and entertainment. You can browse the Internet, watch live television, enjoy digital music and video collections, and watch DVDs.

Windows XP Tablet PC Edition (2002) realizes the vision of pen-based computing. Tablet PCs include a digital pen for handwriting recognition and you can use the mouse or keyboard, too.

Design plays a big role in Windows Vista, and features such as the taskbar and the borders around windows get a brand new look. Search gets new emphasis and helps people find files on their PCs faster. Windows Vista introduces new editions that each have a different mix of features. It's available in 35 languages. The redesigned Start button makes its first appearance in Windows Vista.

Geek trivia: More than 1.5 million devices are compatible with Windows Vista at launch.
2009–Today: Windows 7 and counting...
The Windows 7 desktop

By the late 2000s, the wireless world has arrived. When Windows 7 is released in October 2009, laptops are outselling desktop PCs and it’s common to get online at public wireless hotspots like coffee shops. Wireless networks can be created at the office or at home.

Windows 7 includes many features, such as new ways to work with windows—Snap, Peek, and Shake. Windows Touch makes its debut, enabling you to use your fingers to browse the web, flip through photos, and open files and folders. You can stream music, videos, and photos from your PC to a stereo or TV.

Geek trivia: Windows 7 is evaluated by 8 million beta testers worldwide before it's released.
What's next?

Many laptops no longer have a slot for DVDs and some have solid state drives rather than conventional hard disks. Most everything is streamed, saved on flash drives, or saved in the "Cloud"—an online space for sharing files and storage. Windows Live—free programs and services for photos, movies, instant messaging, e‑mail, and social networking—is seamlessly integrated with Windows so that you can keep in touch from your PC, phone, or the web, extending Windows to the Cloud.

Meanwhile, work is underway for the next version of Windows.