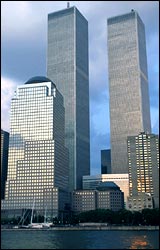 Height: 1,368 and 1,362 feet (417 and 415 meters)
Owners: Port Authority of New York and New Jersey
Architect: Minoru Yamasaki, Emery Roth and Sons consulting
Engineer: John Skilling and Leslie Robertson of Worthington, Skilling, Helle and Jackson
Ground Breaking: August 5, 1966
Opened: 1970-73; April 4, 1973 ribbon cutting
Destroyed: September 11, 2001
The World Trade Center was more than its signature twin towers: it was a complex of seven buildings on 16-acres, constructed and operated by the Port Authority of New York and New Jersey (PANYNJ). The towers, One and Two World Trade Center, rose at the heart of the complex, each climbing more than 100 feet higher than the silver mast of the Empire State Building. 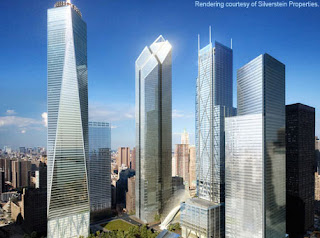 Construction of a world trade facility had been under consideration since the end of WWII. In the late 1950s the Port Authority took interest in the project and in 1962 fixed its site on the west side of Lower Manhattan on a superblock bounded by Vesey, Liberty, Church and West Streets. Architect Minoru Yamasaki was selected to design the project; architects Emery Roth & Sons handled production work, and, at the request of Yamasaki, the firm of Worthington, Skilling, Helle and Jackson served as engineers.

The Port Authority envisioned a project with a total of 10 million square feet of office space. To achieve this, Yamasaki considered more than a hundred different building configurations before settling on the concept of twin towers and three lower-rise structures. Designed to be very tall to maximize the area of the plaza, the towers were initially to rise to only 80-90 stories. Only later was it decided to construct them as the world's tallest buildings, following a suggestion said to have originated with the Port Authority's public relations staff......

Yamasaki and engineers John Skilling and Les Robertson worked closely, and the relationship between the towers' design and structure was clear. Faced with the difficulties of building to unprecedented heights, the engineers employed an innovative structural model: a rigid "hollow tube" of closely spaced steel columns with floor trusses extended across to a central core. The columns, finished with a silver-colored aluminum alloy, were 18 3/4" wide and set only 22" apart, making the towers appear from afar to have no windows at all.

Also unique to the engineering design were its core and elevator system. The twin towers were the first supertall buildings designed without any masonry. Worried that the intense air pressure created by the buildingsÃƒÂ¢ high speed elevators might buckle conventional shafts, engineers designed a solution using a drywall system fixed to the reinforced steel core. For the elevators, to serve 110 stories with a traditional configuration would have required half the area of the lower stories be used for shaftways. Otis Elevators developed an express and local system, whereby passengers would change at "sky lobbies" on the 44th and 78th floors, halving the number of shaftways.

Construction began in 1966 and cost an estimated $1.5 billion. One World Trade Center was ready for its first tenants in late 1970, though the upper stories were not completed until 1972; Two World Trade Center was finished in 1973. Excavation to bedrock 70 feet below produced the material for the Battery Park City landfill project in the Hudson River. When complete, the Center met with mixed reviews, but at 1,368 and 1,362 feet and 110 stories each, the twin towers were the world's tallest, and largest, buildings until the Sears Tower surpassed them both in 1974.

The twin towers of the World Trade Center were more than just buildings. They were proof of New York's belief in itself. Built at a time when New York's future seemed uncertain, the towers restored confidence and helped bring a halt to the decline of lower Manhattan. Brash, glitzy, and grand, they quickly became symbols of New York. 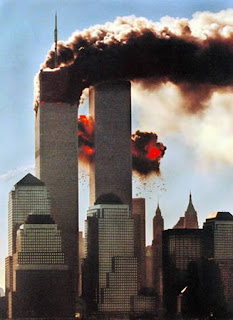 The World Trade Center was conceived in the early 1960s by the Downtown-Lower Manhattan Development Association to revitalize the seedy radio row dominated by electronic stores. Chase Manhattan Bank chairman David Rockefeller, founder of the development association, and his brother, New York governor Nelson Rockefeller, pushed hard for the project, insisting it would benefit the entire city.

In 1962, the Port Authority of New York and New Jersey began plans to build the center. Minoru Yamasaki and Associates of Michigan was hired as architect. Eventually, Yamasaki decided on two huge towers. Critics charged that a modern monolith would rob New York of character, ruin the skyline, disrupt television reception, and strain city services. However, the project was approved and construction began in 1966.

In order to create the 16-acre World Trade Center site, five streets were closed off and 164 buildings were demolished. Construction required the excavation of more than 1.2 million cubic yards of earth, which was used to create 23.5 acres of land along the Hudson River, now part of Battery Park City in lower Manhattan. During peak construction periods, 3,500 people worked at the site. A total of 10,000 people worked on the towers; 60 died during its construction.

The north tower was opened in Dec. 1970 and the south tower in Jan. 1972; they were dedicated in April 1973. They were the world's tallest buildings for only a short time, since the Sears Tower in Chicago was completed in May 1973. However, the towers were ranked as the fifth and sixth tallest buildings in the world at the time of their destruction on Sept. 11, 2001.

Four smaller buildings and a hotel, all built nearby around a central landscaped plaza, completed the complex. The mall at the World Trade Center, which was located immediately below the plaza, was the largest shopping mall in lower Manhattan. The six basements housed two subway stations and a stop on the PATH trains to New Jersey.

In 1993 terrorists drove a truck packed with 1,100 lbs of explosives into the basement parking garage at the World Trade Center. Despite the size of the blastâ€”it left a crater 22 ft wide and five stories deepâ€”only six people were killed and 1,000 injured. The towers were repaired, cleaned, and reopened in less than a month. 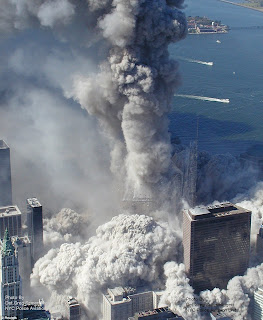 In 2002, separate design contests were held for rebuilding the World Trade Center site and creating a memorial for the victims of the attacks. The first round of finalists for the site, unveiled in July 2002, were widely criticized as being too boring and having too much of an emphasis on office space, leading to a new round of finalists in December.

In February 2003, the Lower Manhattan Development Corporation, which was established by Governor Pataki to coordinate the various agencies and advisory committees involved in the rebuilding efforts, chose architect Daniel Libeskind's design for rebuilding the 16-acre site of the former World Trade Center. The design included a hanging garden, a memorial, a cultural center, and Freedom Tower, which would be a symbolic 1,776 feet tall from the ground to the top of its spire.

In July 2003, David Childs was brought in as the new lead architect of Freedom Tower, although Libeskind remained in charge of designing the site in general. The two had different visions for the tower; a design combining the approaches of both architects was unveiled in December 2003. It would include wind turbines in its spire, designed to generate as much as 20% of the building's power.

On July 4, 2004, New York governor Pataki, New Jersey governor McGreevey, and New York City mayor Bloomberg laid the cornerstone for the Freedom Tower. The skyscraper, estimated to cost $1.5 billion, is expected to be ready for its first occupants by late 2008, while construction on the site in general was expected to last through 2015.

Just as construction was beginning, security concerns were raised, leading to a complete redesign of the tower. The new plans were released on June 29, 2005. The tower is to be moved further back from the streetâ€”and will have a cubic base the same size as each of the Twin Towers. The wind turbines have been eliminated. The design recalls that of the old buildings, while adding its own twists: starting with the square base, the tower's design moves to triangular forms, creating an octagon in the middle, and culminates in a square at the top, rotated 45 degrees from the base. A spire will rise a bit more than 400 feet beyond that, to retain the planned total height of 1,776 feet.

Steady progress has been made on Freedom Tower since construction began in April 2006. The 2.6 million square foot building will house office space, an observation deck, restaurants, and broadcast facilities. Freedom Tower is now scheduled to open in 2011.

The Lower Manhattan Development Corporation announced in January 2004 that architects Michael Arad and Peter Walker had won a competition to design the memorial to the people who died at the World Trade Center. There had been more than 5,000 entries in the competition.

The memorial, Reflecting Absence, would honor those who died at the World Trade Center in terrorist attacks on September 11, 2001, and February 26, 1993.

Reflecting Absence, which will be built where the Twin Towers once stood, includes two shallow pools surrounded by leafy trees. The names of the victims would be etched in walls around the pools.

"In its powerful, yet simple articulation of the footprints of the Twin Towers, Reflecting Absence has made the gaping voids left by the towers' destruction the primary symbol of loss," said Vartan Gregorian, who chaired the jury that chose the winner.

Plans for a new memorial on the site of One World Trade Center were redesigned in June 2006 to address security concerns, budgetary issues, and input from the victims' families. The central featuresâ€”including the two pools fed by waterfallsâ€”will be retained. The names of those killed in the attacks will be moved to the surrounding plaza, above ground.

Work began on the foundation in 2006 and was completed in fall 2007. Construction of the first structural framework began in 2007. The slurry wall, which held back the Hudson River during the September 11th attacks, will be accessible for visitors to view from the memorial. So far $300 million of the $350 million fundraising goal has been raised. The opening of the World Trade Center Memorial is expected for September 11, 2009. Completion of the Museum is expected in 2010.

The Port Authority Trans-Hudson Transportation Hub (PATH) is expected to bring beauty and transport efficiency to Manhattan. PATH was designed by architect Santiago Calatrava to accommodate 250,000 pedestrians per day, which is the projected number of pedestrians for 2025. One of the innovative features of the design is that natural light will reach 60 feet below street level. The Federal Transit Administration has given the 800,000 square foot project $1.92 billion toward its $2 billion projected cost. In September 2007 construction on PATH began. 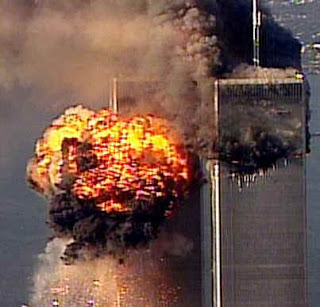 Five World Trade Center office towers will be a large part of the redevelopment of downtown Manhattan and transform New York City's skyline. They will provide over 10 million square feet of office space. Construction is expected to be complete by 2012.

A 1,000 seat performing arts center will be located just 60 feet from One World Trade Center on Fulton and Greenwich streets. Frank Gehry will make designs for the project, which is expected to cost $500 million. The modern dance Joyce Theater will be featured at the Performing Arts Center as well as the Tribecca Film Festival each spring. Construction on the center will start in 2010 or 2011.
Posted by Saahil at 15:54