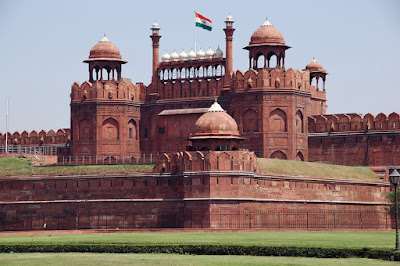 In the central part of the Lal Kila fort is Nauba Khana (Drum House) where musicians of the emperor used to play for the royal household. The arrival of the princes and the royal family is also heralded from here. Mogul architecture can be seen inside the fort here.

Other attractions in the fort complex include:
Rang Mahal (Palace of Colours) which is a lotus-shaped fountain made out of a single piece of marble and was used as living quarters for emperor's wives and mistresses.

Diwan-I-Am (Hall of Public Audience): The hall where emperor used to sit and hear the complaints of common folks.
Sheesh Mahal and Khas Mahal are also special attractions in the fort complex.

Every year on August 15th, the day of Indian Independence, the Prime Minister of India would address the nation from the Red Fort.

Another attraction of the Red Fort (Lal Killa) is the Sound and Light Show which is a 62 minute audio visual spectacular showcasing the history of Delhi and that of the fort.

Tourists as well as locals usually come to this place to get away from the hustle and bustle of the city life and enjoy an evening in the serene atmosphere of the plush green lawns inside the walls of the fort.
Nearest Metro station for Lal Kila is Chandni Chowk
Visiting Hours: 9:30AM to 4:30PM daily (except Monday)
Entry Fee: Rs.10/-(For Indian Citizens) and Rs.150/- (For foreigners)
Entry Fee for Sound and Light Show: Rs.50/-