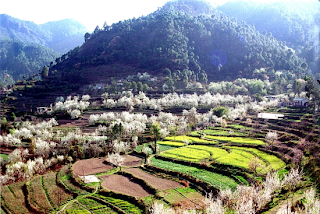 Solan district is one of the twelve districts of Himachal Pradesh state in northern India. Solan town is the administrative headquarters of the district. The district occupies an area of 1936 kmÂ².

The district in its present form comprises of the erstwhile princely states of Bhagal, Bhagat, Kunihar, Kuthar, Mangal, Beja, Mahlog, Nalagarh and parts of Keonthal and Kothi and hilly areas of composite Punjab State which were merged in Himachal Pradesh on the Ist November, 1966 on the reorganisation of composite Punjab on the linguistic basis. Most of these princely state as per history were subjected to the onslaught of Gorkha invasion from the year 1803 to 1805. it was in the year 1815 that after th gorkhas lost to the Britishers, these states were freed and restored tot he respective rulers.

Most of the states were small in area and population and were under the control of the superintendent of Shimla Hill States before Independence. Himachal Pradesh appreared on the administrative map of the country on the 15th April, 1948 and the states of Bhagat, Baghal, Kunihar, Kuthar, Mangal, Beja, Keonthal and Koti formed a part of the then Mahasu District. Nalagarh state which was merged after Independence in Patiala and East Punjab State Union later on formed a part of Punjab when the reorganisation of the states took place in 1956 and remained a tehsil of Ambala District, Kandaghat and Shimla tehsils of Shimla district like othe rhilly areas of Kullu, Lahul and Spiti and Kangra districts become part of Himachal Pradesh on the Ist November, 1972 and Solan District sprang up on the administrative map of the state. 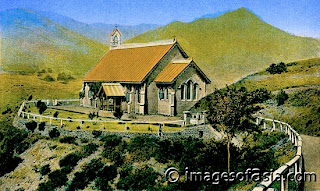 Situated in the Shimla Hills, a part of the Mahasu district of Himachal Pradesh, Solan, now recently district headquarters by the same name, another small town developed by the British, is named after the Goddess, Sholoni Devi, whose temple is located in the southern end of the town. The district of Mahasu, the most developed of all in Himachal, thanks to the British, has a number of small towns to each of which practically, a cantonment is attached. Solan is well known for its brewery 4.8 km [3 miles] from town started in 1835 with Anglo-German co-operation, and known as Dyer-Meakin Brewery, producing excellent larger beer and quality whisky.


In 1950, it was taken over by the late Major Mohan, renamed Mohan-Meakin Breweries in 1966. With an improved quality, the enterprise gives employment to thousands, both in Himachal and the plains. Chir pine clothes the Shimla Hills, which yields resin and timber while apricots and walnuts grow all over the hills, maize and paddy are the two leading grains Vegetables and Shimla variety of green chillies are extensively grown in the Shimla Hills to be sold to tourists and others. The area surrounding Solan in very rich in peas, tomatoes, ginger and beans. Connected to Kalka, broad-gauge railway terminus by a hill-railway, using diesel engines, and also by road, the holiday begins at Kalka. 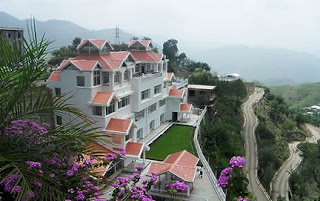 Situated midway between Shimla and Kalka, in the outer ranges of the Himalayas, Solan is at a height of 1,350 metres [4,432ft] and popular with those desire to spend more time in the hills. Coming from the parched planis, the first stop traditionally, is Barog, 37 km from Kalka, and 5 km from Solan, Barog, refreshingly cool spot in idyllic surroundings is a wonderful prelude to the holiday ahead. Along with the elegant Hotel Pinewood & Cafe, the Himachal Tourism Development Corporation has constructed a glass house for residential purpose
First of its kind in Asia spread over 550 hectares in village Nauni on the Solan-Rajgarh Road in district Solan of Himahcal Pradesh, 15 km from Solan town, the University was established on December 1, 1985. Considering the signal contribution made by Dr. Y.S.Parmar, the founder and first Chief Minister of H.P, the present Govt, rightly named the new University after him. It has a College of Horticulture and College of Forestry, which are sub-divided into 14 departments and are looked after by a faculty of over 200 scientists and teachers.


University offers under-graduate, post-graduate and doctoral courses in horticulture, forestry and allied disciplines. It will act as the national research centre for all the hill regions of the country. This University inaugurated by Hon'ble Shri Rajiv Gandhi, Prime Minister of India on 30th April, 1988. The State Govt. is already wedded to the preservation of the gragile eco-system of the Himalayas. The University will produce specialists in forestry, conduct research in conservation technology, train forest officials in social forestry and impartpractical training to farmers in nursery production for agro-forestry. The University will train specialists in fruit culture, floriculture, herbiculture and vegetable cultivation. It will conduct research and train farmers to use improved technology in the fields, in order to optimise their income from fruits, vegetables, flowers, medicinal and aromatic plants, bee-keeping, mushrooms, etc.


Solan is the ideal spot for picnics and long rambles into the woods, where, more often than not, is a cool and refreshing spring. For picnickers and ideal places are Karol Tibba and Meteol Tibba. Just a kilometre away is the Kotla Nullah providing lovely shady spots with running water while Saproon spring and the Happy Valley are delightful places for a ramble through fragrant pines. Solan has not forgotten the avid angler, within a radius of 20 km [12.4 miles] on motorable road are Mareog, Gaura and Karkanu where the river Giri flows. It is well stocked with fish. The Himachal Agriculture College and the Research Institute are also located in Solan. With a view to developing Solan into a popular tourist resort the Himachal Tourism Development Corporation has constructed well equipped Tourist Bungalow.
Solan District derives its name from Solan town which came into existence after the construction of the Cantonment at that palce around the last quarter of the 19th century

Old States :-
Bhagat
The name is popularly derived form Bau or Bahu said to be a hilly word meaning many and Ghat meaning pass. Others are of the view that it ia s misnomer of Baraghat(12). There are certainly many places in the erstwhile Bhagat state which are known as Bhagat State which are known as Ghat. The state headquarters of the Bhagat State was located at Bhoch in the Bhuchali pargana. The headquarter was shifted to solan after the construction of Cantonment at that place. The founder of the ruling family is said to be Basant Pal or Hari Chand Pal, a Panwar Rajput from Dharana Giri in the Deccan.

Bhagal
The ruling family of the state traces its origin from Aje De a panwar Rajput who came from Ujjain. In the year 1905, there was a revolt by the entire Kanet population which was put down with the help of the Superintendent of Shimla Hill state. Thereafter, the state was put under the charge of the Manager and the Tikka was installed as Raja of the state. The last ruler was Raja Rajindra Sing and the state was merged in Himachal Pradesh in 1948 and remained a part of Mahasu district till 31st August, 1972.


Kunihar
The state was founded by Abhoj Deo who had come form Akhnur in Jammu and acquired the state by conquest about the year 1154 A.D. Most of his descendents were keen warrier and they assisted Nalagarh and Bilaspur rulers in their various wars mainly against Kullu. During the region of Keso Rai who ruled over the state during 1600 A.D., the affairs of the state began to fall as the ruler was a weak and indolent with the result the neighbouring states seized portion of the territory.

Kuthar
Surat Chand, the founder of the ruling family is said to have come from Kishtwar in Kashmir and is said to have acquired the state by conquest. At the time of Gorkha invasion, Rana Gopal Chand was the ruler. The state was restored by the Britishers. The state was merged with Himachal Pardesh in April, 1948 and remained part of the then Mahasu district till August, 1972.
Mahlog
The ruling family of the state traces its origin to Bir Chand, Raja of Ajudhia who visited Mansrover Lake on the directions from Lord Shiva in a dream. On his way back, he expelled the Mawis in the neighbourhood of Bhawana and established the kingdom of his own. During the time of Ajit Chand, Raja of Kangra annexed 9 or 10 pargana of Mahlog state and handed over the same to Bhagat and thenceforth the Mahlog Chief was known as Rana instead of Raja. The state was restored to Ajit Chand by the Britishers after the Gorkha war. The later rulers were Sansar Chand, Raghunath Chand and Durga Chand etc. The state was merged with Himachal Pradesh in 1948 and formed a part of Solan tehsil of the then Mahasu District.

Beja
The ruling family of teh state was belonging to the Rajput of Tunar Got and is said to have hailed from somewhere in the neightbourhood of Delhi. Bishan Chand was the chief at the time of Gorkha invasion. The state was restored to him under the title of Thakur.

Mangal
Mangal was the most inaccessible of all the hill states. Originally, it was a tributory to Bilaspur and was declared independent at the end of the Gorkha war. The ruling family is said to have come from marwar and belonged to Atri Tribe of Rajpur Community.

Sholoni Devi Temple is located at Solan in Himachal Pradesh. The Temple has an irresistible old world charm.The temple of Sholoni Devi is dedicated to the goddess Shooloni Devi. The name of the place 'Solan' is a derivation of the word Shooloni or Sholoni.

The spiritual ambiance of Sholoni Devi Temple is amplified by the beautiful scenery all around the temple. Chir Pine drapes the Shimla hills, which yields the cash crops of resin and timber. Apricots and Walnuts grow all over the Shimla hills. Paddy and maize are two leading food grains in the region. Green chillies of a flavor unique to Shimla are grown in the areas around the vicinity of Sholoni Devi Temple. Other vegetables are also grown. The area surrounding Solan is ideal for commercial growing of peas, tomatoes and ginger. The farmers cultivating these crops believe in the goddess Sholoni Devi and pays obeisance to her by coming to the Sholoni Devi Temple.

In accordance with agrarian traditions of holding a fair at a certain time of the year the world over, the famous Shooloni fair is held every year besides the Sholoni Devi Temple grounds. Physical sports competitions like wrestling is held in the Shooloni fair.
Posted by Saahil at 15:10