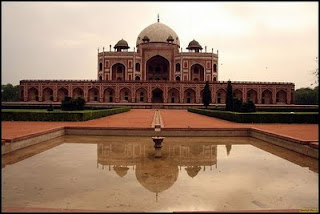 ''Spectacular!'' This is how US President Barack Obama described the Humayun Tomb as he visited the 450-year-old Mughal monument, getting a glimpse of India's rich cultural and historic civilisation.....

Obama, who kicked off his engagements in Delhi with the visit to the 16th century marvel, went around with his wife Michelle intently getting the feel of the monument, which is said to have inspired the creation of Taj Mahal.....

49-year-old Obama and Michelle (46) drove to the monument soon after their arrival from Mumbai at the airport here, where the US' first couple was personally received by Prime Minister Manmohan Singh and his wife Gursharan Kaur.

At the monument, the couple spent around 45 minutes enquiring from Superintendent Archaelogist, Archaelogical Survey of India (ASI) K K Muhammad about the history of the architectural marvel located over a 32 acre plot in south Delhi's Nizamuddin.

"Wonderful. Let's take a look," Obama said as he entered the main building. 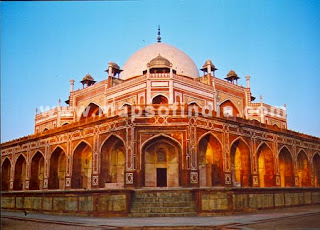 Muhammad informed to the First Couple about the history of the monument while he took them around the plush green gardens that surround a central structure.

Muhammad said Obama was curious to know about the time taken to build the monument. He was also told the structure was a confluence of three architecural styles -- Persian, Central Asian and Indian.

Michelle did not ask many questions and wanted to know the importance of lotus on a wall at the monument. She was told that it reflected the Indian influence on the builders of the monument.

The US President was seen striking a chord with the kids as he chatted with them and posed for a group photograph.

He and Michelle also distributed gifts -- a two-and-half-inch long silver bookmark with Presidential seal which also carried Obama signature -- to the children.

"It is spectacular. If our guys have to build it in seven years, it would be pretty tough. Good contractor," a visibly impressed Obama said after visiting the monument.
About the national capital, he said "Delhi is such modern city yet rooted in civilisational heritage."

"Through the rise and fall of empires, Indian civilisation has endured and led the world to new heights of achievement. The world owed a profound debt to India and its people," Obama wrote in the visitor's book at the Humayun's Tomb. Michelle signed below his signature.

The group of 14 children in the age group of 5-13 was euphoric about their brief interaction with the US first couple.

Each of the 14 students carried slates with a simple 'Welcome H.E. Barack Obama and Michelle Obama' written by them in long hand.

"I have written it in English," was the coy reply of five-year-old Pooja as she hugged her slate and a gift box handed over by Michelle.

"Hamko Obamaji bahut acche lage (We like Obama very much)," said Sakshi, who studies in the first standard at the Nursery Junior School inside the Red Fort.

The students were children of labourers who work at various sites tended to by the ASI. Muhammad has been arranging for the schooling of the labourers' children, who otherwise would hang around their parents whiling away their time.

The students were also happy at the gifts they received from Obama and his wife.
"I will cherish this gift forever," said Vishal, the son of a stone cutter Ramdas who works at the Tughlaqabad fort on the outskirts of Delhi.

Obama was also keen to know about Dara Shikoh, the eldest son of Emperor Shahjahan whom brother Auranagzeb defeated in a bitterly fought battle for the throne.

Dara Shikoh, known for his intellectual pursuits and as an erudite champion of mystical religious speculation, is believed to have had an influence over American transcendentalists.

It was this connection that had Obama attracted towards Dara as he was shown around the Humayun's Tomb. Dara was murdered on Aurangzeb's orders and his remains were buried in an unmarked grave in the Humayun's tomb premises.

Obama, when told that the monument was an inspiration to build the Taj Mahal, asked when was the Taj built.

Muhammad told him that it was built 70 years after the Humayun's tomb.
Posted by Saahil at 22:30