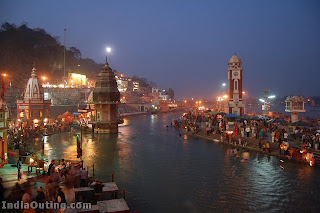 â€“ Dwar of Hari or Gateway to Lord Vishnu, is a holy city situated at the base of Shivalik ranges of high Himalayas as well as on the flow path of revered River Ganga. It is widely believed that by taking a dip in this holy river, one is cleared of all his past sins. Lakhs of devotees from all over India visit Haridwar every year to take a dip in the holy River Ganga.

Maa Ganga after carrying the purity of heaven  from the kamandal of Lord Brahma, washing the feet of Lord Vishnu and flowing through the sahastrara of Lord Shiva came on this earth and made Haridwar as itâ€™s divine flow area. From time immemorial, Maa Ganga has been doing the duty of absorbing the heat and negativities of this earth. Besides and  , It is Gateway for the four dhams of  Himalayas viz. Gangotri, Yamunotri, Badrinath and Kedarnath.


It is also believed that Amrit which was one of fourteen ornaments that came out from the Samundra Manthan was sprinkled at 12 places in the universe out of which 8 places are in heaven. Har-Ki-Pauri in Haridwar was one of the four places where Amrit was sprinkled on earth. As a result , every 12 years Khumbh comes to Haridwar and draws half a million pilgrims.

Besides itâ€™s religious sanctity, Haridwar is also known for its Industrial pilgrimage as it houses one of the plants of the â€˜Bharat Heavy Electricals Ltd.â€™ (BHEL) â€“ a Navratna company. It was established during the first step of Industrialization done by first Prime Minister of India Shri Jawaharlal Nehru after independence. 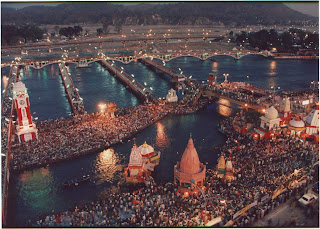 A paradise for nature-lovers, Haridwar presents kaleidoscope of Indian culture and civilization. Haridwar also termed as 'Gateway to Gods' is known as Mayapuri, Kapila, Gangadwar as well. The followers of Lord Shiva(Har) and followers of Lord Vishnu(Hari) pronounce this place Haridwar and Haridwar respectively as told by some. It is also a point of entry to Dev Bhoomi and Char Dham (Four main centers of pilgrimage in Uttarakhand) Viz. Badrinath, Kedarnath, Gangotri and Yamunotri.
Archaeological finding have proved that terracotta culture dating between 1700 B.C. and 1200 B.C. existed in this region.

Legendary king Bhagirath is said to have brought the river Ganga from heaven to earth in order to provide salvation to his ancestors. It is also said that Haridwar has been sanctified by the presence of three Gods; Brahma, Vishnu and Mahesh. Lord Vishnu is said to have his foot print on the stone that is set in the upper wall of Har-Ki-Pauri where the Holy Ganga touches it all the times . Devout believers feel that they can go to heaven by getting their salvation after a dip in the sacred Ganga at Haridwar.

Haridwar is also one of the four places; where Kumbh Mela occurs after rotation of every twelve Years and Ardh Kumbh after every six years. It is said that drops of Amrit (Elixir) fell in to the Brahmkund of Har-Ki-Pairi, therefore considered that a dip in the Brahmakund on this particular day which is very auspicious and when Jupiter (Brahaspati) comes to the sign Aquarius (Kumbh) once in every twelve years the Maha Kumbh fair is celebrated at Haridwar. Kumbh, 1998 was the last Maha Kumbh of this century. Yet beyond the mystic aura and mythology, Haridwar casts another magic spell on the visitor. Being one of the oldest living cities, Haridwar finds its mention in the ancient Hindu scriptures as it waves through the life and time stretching from the period of the Buudha to the more recent British advent. Haridwar has not only remained the abode of the weary in body, mind and spirit, but also served as centre of attraction for many, for learning the arts science and culture. Haridwar's long standing position as a great source for Ayurvedic medicines and herbal remedies as well as its unique Gurukul school of traditional education, the scenic beauty and lush greenery...all give the city unique flavors and charm; a must among the sojourn centers in a discoverer's intinary of Uttarakhand - A destination for all seasons. 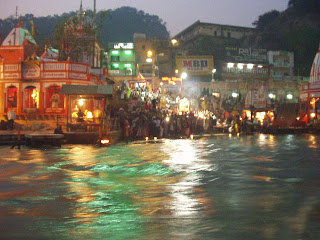 Haridwar is one of the first towns where Ganga emerges from the mountains to touch the planes. And that's why the water is crystal clear and cool. Lush green forests and small ponds add to the scenic beauty of this holy land. The Rajaji National Park is just 10 kms from Haridwar. Its an ideal destination for wild life and adventure lovers. In the evening the ghats look breathtakingly beautiful as thousands of diyas (lamps) and marigold flowers float and illuminate the holy waters.

Haridwar as today has not only religious importance but it has another temple of modern civilization i.e. BHEL, a 'Navratna PSU' to its credit. The Roorkee University at Roorkee is one of the oldest and prestigious institute of learning in the fields of science and engineering. Another university of the district i.e. Gurukul having vast campus is giving traditional educations of its own kind.
Posted by Saahil at 21:50